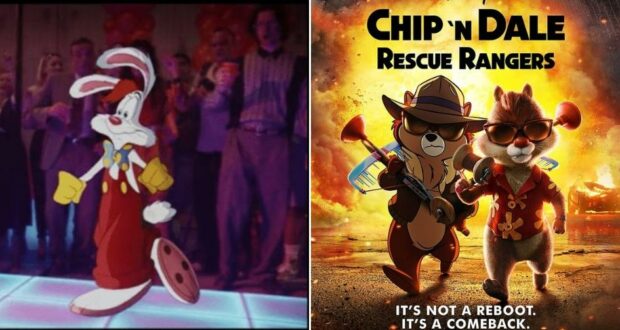 Chip ‘n Dale: Rescue Rangers dropped on Disney+ on Friday, May 20, and fans immediately began comparing the film to another cartoon caper, Who Framed Roger Rabbit?

While there are admittedly enough similarities to warrant a separate comparison article, let’s take a moment to look back at the direct references to Robert Zemeckis’ instant classic.

Cameo and Direct Reference to Roger and Jessica Rabbit

We start with a direct cameo of Roger Rabbit very early on in the movie during the flashback montage. Chip and Dale were “dancing the Roger Rabbit with Roger Rabbit.”

We don’t get to see Jessica Rabbit, but the chipmunks mention her while on their way to see Peter Pan (AKA Sweet Pete).

There is also a two-fold “Baby Herman” reference as well. Like Herman, Chip and Dale (John Mulaney and Andy Samberg) have their on-screen voice and their normal voice. But even more, like Herman, we see a Peter Pan voiced by Will Arnett, which creates more of that classic comical (and slightly disturbing) dissonance.

One Roger Rabbit easter egg actually makes this writer question whether or not Rescue Rangers is actually a sequel in the same universe rather than just another standalone film. Just before Peter is about to erase Chip’s mouth, the camera pans over a line of different weapons, and sitting right next to the big pink erasure is a bottle that reads “DIP.” 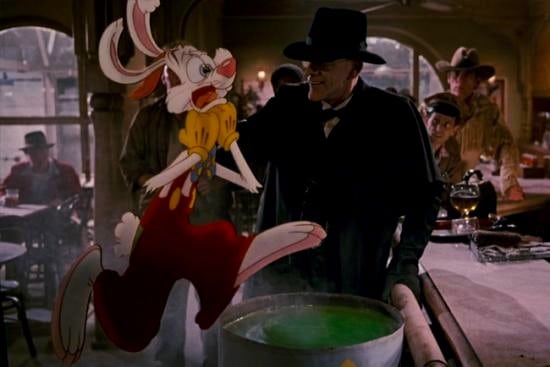 A concoction of turpentine, acetone, and benzene, dip is a yellowish-green liquid that is, essentially, paint thinner and used by Judge Doom to wipe toons from existence. It appears that Peter figured out how to make it and has kept it on hand, just in case. Thank goodness it is never used. Just like Roger Rabbit, we learn that the antagonists are actually toons themselves. Only instead of weasels, we have an eclectic group of baddies.

Rescue Rangers and Roger Rabbit are once-in-a-generation movies that ask what would happen if toons really are like people and have to deal with the struggles that come with living in Hollywood and finding work wherever they can. The combination of satiric realism and character commitment triggers powerful sympathy and hopefully a deeper appreciation from the audience who grew up watching their favorite cartoon characters. (However, we still have not seen another project that could make a scene featuring Mickey Mouse and Bugs Bunny possible.)