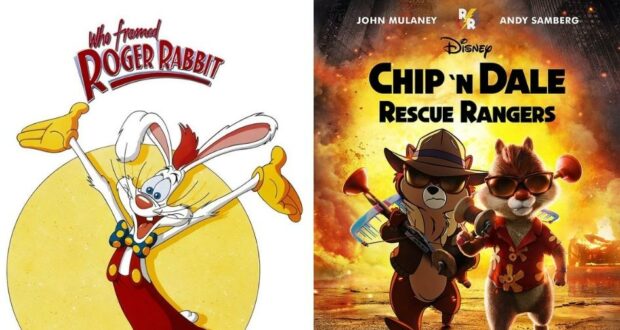 The short clip gives more insight into a version of Hollywood where humans and cartoons live in harmony and the stories conflict, and here are a few ways it lines up perfectly with Roger Rabbit.

1. Toons Are Adults with Adult Problems

In Who Framed Roger Rabbit, viewers got a flash of almost disillusionment when it came to the Toons. They were much more human in personality and living situations. If Toons can’t get cast in a film, they have to find other jobs to get by.

We see something similar in Rescue Rangers. Chip becomes an insurance agent after his show got canceled, his and Dale’s chipmunk voices were a part of their on-screen personas rather than their actual voices (perhaps an hommage Baby Herman), and Dale gets the CGI Surgery–the apparent toon equivalent of plastic surgery.

However, unlike Roger Rabbit, Rescue Rangers acknowledges the crazed, Comicon culture that exists today, and it appears the toons are integrated into the fabric of Los Angeles rather than having a “Toon Town” to call home.

2. A Toon Crime is Afoot

As if it was not obvious already, we have another movie where toons are involved in some sort of crime, whether it is doing the crime or solving the crime. But rather than framing one of the characters like in Roger Rabbit, it looks like Rescue Rangers takes a play from Disney’s Zootopia’s book, basing the story around missing persons.

3. A Crazed Toon is the Bad Guy

Just as it was in Roger Rabbit, Rescue Rangers appears to have made a toon go bad as the film’s antagonist. While director Robert Zemeckis made viewers wait until the climactic end to find out that it was another toon who framed Roger Rabbit (played by Christopher Lloyd), the crew behind Rescue Rangers appeared to expose the cartoon villain right away: apparently, it is a grown-up Peter Pan.

It does not appear that any other toons have grown up, so one has to wonder if something happened to Peter that made him into a grown man.

At the end of the day, fans will see characters of different animation styles co-existing together just as they were in Who Framed Roger Rabbit. But animation has evolved so much since 1989 with the Disney Renaissance and the dawn of computer animation and CGI. There is little doubt that fans will be in for a visual feast.