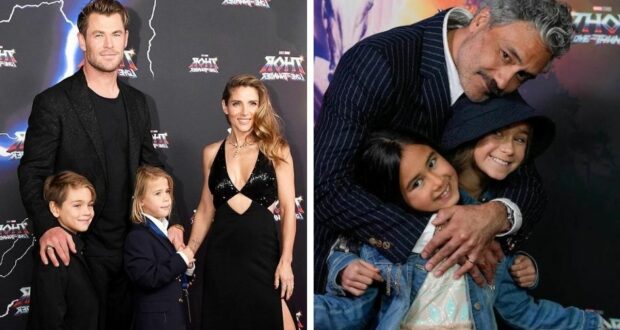 Meet the Children Who Created the ‘Thor: Love and Thunder’ Villains

If you’ve already seen the new Marvel movie Thor: Love and Thunder, or seen a trailer for it, then you know that there is one main villain: Gorr the God Butcher, played by British method actor Christian Bale (who some fans will recognize in his out-of-character role from the Disney musical Newsies). However — spoiler alert! — there are plenty of evil minions to be found in the Marvel Studios film too, and director Taika Waititi and lead actor Chris Hemsworth brought their families in to help them brainstorm the monsters’ scary appearances!

In an exclusive interview with PEOPLE magazine, Waititi and Hemsworth revealed that their children were instrumental in creating the shadow monsters and oil monsters in the Marvel movie. Apparently, while Taika Waititi was writing the script for Thor: Love and Thunder, one of his daughters asked him to describe the “oil monster” that he was developing. When Waititi confessed that he had no idea what an oil monster should look like, his child suggested that it be “spiky” and drew a “snakey thing” on the spot.

After seeing his daughter’s creativity in action, the Thor: Ragnarok director told Chris Hemsworth to get his children “to do some drawings” too and share them for the Marvel Studios film. “Then we gave them to the artists at Marvel,” Taika Waititi said, “and they turned them into these rendered, wild monsters. That’s why the monsters are so weird and look so cool.”

The involvement of cast members’ children didn’t stop in the art department, however. Any interested children of Hemsworth, Waititi, their co-stars Natalie Portman (who plays Mighty Thor or Jane Foster) and Christian Bale, and “anyone [else] who had kids in the cast” were all in the Thor franchise’s newest addition too! Can you spot them in Thor: Love and Thunder (particularly during one iconic battle scene towards the end of the Marvel Studios film)?