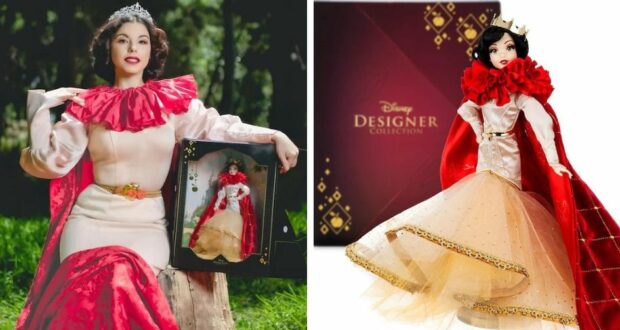 Social media is filled with influencers who focus on either cosplaying or Disneybounding as Disney characters, Pixar characters, or Marvel characters. While Disneybounding is typically done in the Disney Parks, a cosplayer dresses as a favorite character whenever or wherever they would like to — and one cosplayer in a Snow White costume was recently invited to partner with Disney for a very special reveal of a doll that is a stark departure from Disney’s more classic doll styles!

According to the Disney Parks Blog, “on June 1, the Snow White Limited Edition Doll was revealed to the public by ‘rebel princess’ and cosplayer Amber Arden” (whose Instagram handle is @amberarden). This Snow White doll (portraying Snow White from the classic 1937 animated movie Snow White and the Seven Dwarfs) is the most recent addition to the Disney Designer Collection, which has included several in-demand Disney princess dolls like Tiana, Merida, Ariel, and Mulan. However, this fancy dress doll is definitely not like a Snow White classic doll!

“I had the awesome opportunity to create a look inspired by the New Ultimate Princess Celebration Designer Doll Collection! 👑 Thank you @shopdisney for allowing me to see this magnificent Snow White doll before it comes out on June 14th…just so I could make my Cosplay from it,” Amber said on Instagram. “In the past, I made a costume inspired by their 1930’s #SnowWhite Designer doll! So this is truly an HONOR 👏 I’m swooning over the ruff & all the details! 🏰” the cosplayer (who can be seen above and below dressed in a Snow White costume to represent Snow White from Snow White and the Seven Dwarfs, to match the doll) continued.

Even though the presence of influencers, cosplayers, and Disneybounding enthusiasts is common in Disney Parks or Disney Resorts, it is still somewhat unique to see Disney partnering with a cosplayer in a Snow White costume for the reveal of something as exclusive as an Ultimate Princess Celebration Limited Edition Doll. The couture versions of Disney princesses in this shopDisney collection are expensive, in-demand, and high-end — so the fact that Amber was able to use her social media platform to provide her followers with some teaser images of the Snow White doll is significant!

The couture Snow White doll in the Ultimate Princess Celebration collection for shopDisney was designed by Steve Thompson with a specific goal to differ from any Snow White classic doll, and it will be available in the shopDisney Disney Designer Collection section of the online store’s site as of June 14 at 7 a.m. Pacific Standard Time. Even though couture dolls like this product are expensive, they tend to sell out quickly!

Will you be buying this Snow White doll from shopDisney, or would you prefer a Snow White classic doll? Were you already familiar with this particular cosplayer, and do you like her Snow White costume?