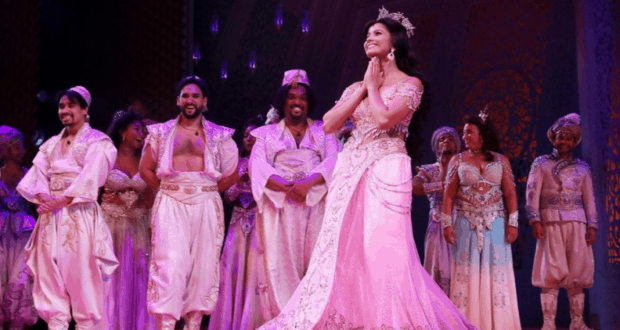 Earlier this week, the cast of Disney’s Aladdin was finally back on stage for the musical’s opening night on Broadway. The Lion King, Aladdin, and Frozen were all making joyful returns, and the casts’ members all expressed their excitement in an interview with D23 earlier this September. There was even a unique and emotional performance on The View Wednesday morning, in which the lead duos from all three musicals (plus Aladdin’s Genie) carried out a powerful performance, ending in a wonderful rendition of “Let It Go”. Aladdin had only had its opening night less than 24 hours before, with Michael Maliakel and Shoba Narayan making their debuts as Aladdin and Princess Jasmine.

Unfortunately, members of Aladdin’s company tested positive for COVID-19; just hours after the performance on The View, the Aladdin production canceled its Wednesday night performance with the Instagram post below. According to the post (which seems to have been deleted), “breakthrough COVID-19 cases have been detected”. Fans were disappointed and sympathetic to the cast of the show, and relieved to hear that Aladdin resumed on Thursday night with the second post below; apparently “negative PCR testing allowed [them] to move safely forward with [the] performance”, according to the third post further down in this article. 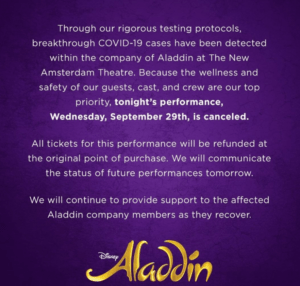 Sadly, Aladdin has just released another update tonight, saying that additional cases have been “detected” in the company. Aladdin performances are now canceled until at least October 12th at 7 pm. 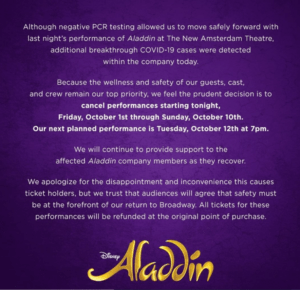 This means that the Aladdin cast have only gotten to perform their show for two days so far. And since the three leads from Aladdin just performed with the four lead performers from Frozen and The Lion King (without masks), we can only wait and hope that cases don’t present themselves in those Broadway shows too. While the consistent testing and safety precautions of the Aladdin company are certainly needed–clearly, from the positive test results that are showing up–it’s no doubt difficult and discouraging for all of the cast to have their triumphant return curtailed so soon after opening night. From the reviews of what performances they did get to have, we know that Aladdin promises to be a wonderful show with truly talented cast members when it’s back up and running!