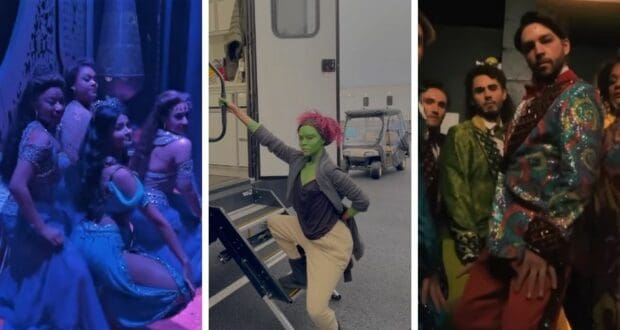 Internet challenges have often gone viral in recent years, but challenges on the social media platform TikTok have gotten particularly popular with people in recent months. One such challenge called the Beyoncé Drop Challenge has received viral fame, and several Disney and Marvel performers have joined in!

The challenge involves dropping low — which is a common dance move — as low as you can to the ground in unison with the beat from Beyoncé’s song Yoncé.

Actress Zoe Saldana (who plays the character Gamora in the Marvel Cinematic Universe, mainly in the Guardians of the Galaxy films that star Chris Pratt), is currently filming the movie Guardians of the Galaxy Vol. 3 and has been very generous when it comes to sharing funny clips from life on the set of the Marvel series, so we’re not surprised to see that she’s added to her funny Instagram reels by participating in this challenge!

Zoe Saldana has also gotten her hair and makeup team involved in her Instagram videos, particularly in her comical videos about Gamora’s dietary cleanse, so it’s no surprise that her makeup artist joined in on this Beyoncé drop challenge.

The cast of Aladdin on Broadway also participated in the TikTok challenge, with appearances from Shoba Narayan (who plays the character Princess Jasmine), Dennis Stowe (who plays Jafar), and Don Darryl Rivera (who plays Iago and has posted some funny Disney videos of his own). Ensemble members in the Broadway cast also made an appearance during the challenge, which was shared on Instagram!

Which other Disney or Marvel celebrities would you love to see participate in the Beyoncé drop challenge? Have you seen this trending Beyonce Drop Challenge on TikTok or Instagram, and do you love seeing celebrities or performers share tidbits from behind the scenes of Marvel movies and Disney shows or performances?