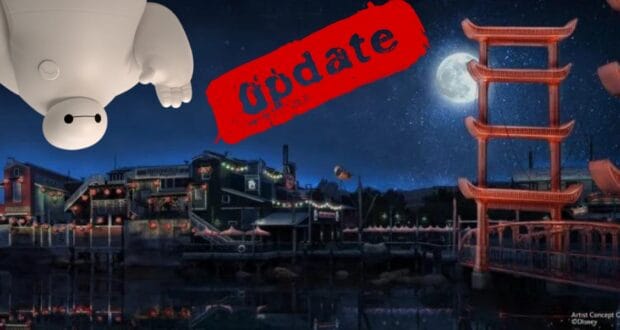 Baymax is coming to Disneyland, and work is finally underway.

At the 2022 D23 Expo last September, Disney Parks Chairman Josh D’Amaro revealed that Marvel’s and Walt Disney Animation’s Big Hero 6 would come to life at Disney California Adventure Park as the Pacific Wharf-themed land would be reimagined as the movie’s setting, San Fransokyo. We have received word that work on this project is officially underway.

According to Theme Park Insider Scott Gustin (@ScottGustin), “Construction has officially started …The lagoon is being drained today to allow for work to begin.”

“Pacific Wharf in Disney California Adventure Park will be reimagined to San Fransokyo from ‘Big Hero 6’. Work has started to bring San Fransokyo to life, and we look forward to sharing more details at a later time.”

"Pacific Wharf in Disney California Adventure Park will be reimagined to San Fransokyo from ‘Big Hero 6’. Work has started to bring San Fransokyo to life, and we look forward to sharing more details at a later time.” pic.twitter.com/QigEyUZj6k

This will be just the latest themed land of Disney California Adventure to be rethemed off of a Studio franchise. Paradise Pier has already been rethemed to Pixar Pier, Cars Land was added to the Park, and Marvel’s Avengers Campus took over A Bug’s Land.

No official opening date was given during the initial announcement, and it still remains a mystery at this time. However, we do know that it will be immersive and include a permanent meet-and-greet spot with Baymax. A miniature version of the San Fransokyo bridge is also expected to be erected.

Considering how close we are to the start date for Disneyland’s new “World of Color – ONE,” it is likely that the draining of the area surrounding Pacific Wharf will not affect the water levels in other parts of Paradise Bay. Disney’s Big Hero 6 and Baymax! mini-series are available for streaming now on Disney+.