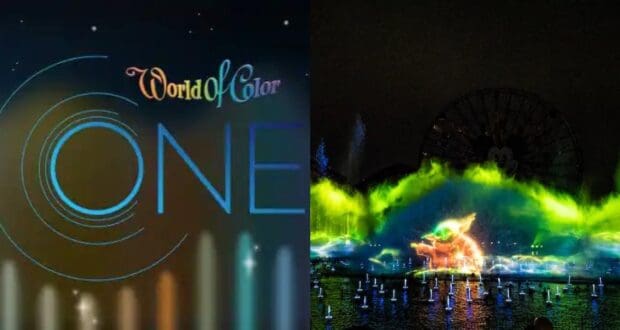 Disney’s 100th Anniversary Celebration is already promised to be an unforgettable event spread out across all of the Disney Theme Parks around the world, including Magic Kingdom, EPCOT, Disney’s Hollywood Studios, and Disney’s Animal Kingdom at The Walt Disney World Resort in Florida and Disneyland Park and Disney California Adventure at the Disneyland Resort in California. With the celebration will come new nighttime spectaculars, specifically at Disneyland Park and Disney California Adventure, and today, fans got a glimpse at the brand new version of “World of Color,” including a sampling of its new song, “Star a Wave” from GRAMMY-nominated artist Cody Fry featuring lead vocals from Loen Allred.

“‘World of Color – ONE’ celebrates how a single action, like a drop of water, creates a ripple that can grow into a wave of change. You’ll discover how it only takes one action to make an impact on the people in our lives and the world around us, just as one man – Walt Disney – started the wave that has continued to grow and inspire people around the globe for 100 years.”

The show’s score will feature 18 different compositions in total, as projections showing characters and moments from Walt Disney Animation Studios and Pixar–including The Lion King, Coco, Moana, and Mulan–, Marvel’s Avengers and Star Wars come to life amid 1,200 dancing fountains. The show will also coordinate with the MagicBand+. “World of Color — ONE” will premier alongside Disneyland Park’s new fireworks show, “Wondrous Journeys,” on January 27.