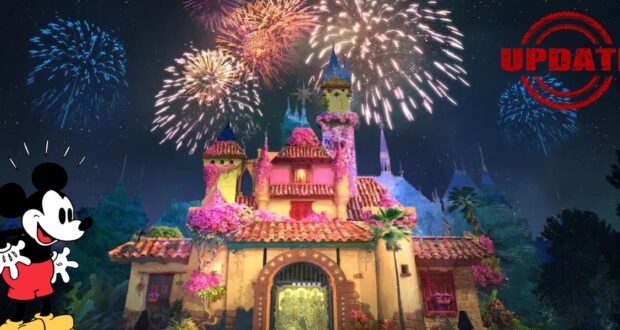 Walt Disney Imagineers will be unveiling a brand new fireworks show that will light up the skies in honor of The Walt Disney Company’s 100-year anniversary in late January. And today, Disney Parks gave fans a glimpse into what they can expect!

The Disney100 celebration at @Disneyland will include the new nighttime spectacular “Wondrous Journeys,” celebrating 100 years of Walt Disney Animation Studios! ✨ ? Check out a behind-the-scenes look at the recording session for the new song here: https://t.co/LWxkPinddu pic.twitter.com/rnwYdN4mQS

Disney’s newest fireworks show is called “Wondrous Journeys.” It will take to the skies above Sleeping Beauty Castle at Disneyland Park beginning January 27, 2023, celebrating Walt Disney Animation Studios’ century-long legacy. With a little more than a month to go before its debut, Disney Parks released a behind-the-scenes look at projection testing and studio recordings as well as some new concept art, setting magical expectations for what is to come.

This will be a tribute to all of the amazing stories Walt Disney Animation has been able to share through the years, from Steamboat Willie and Sleeping Beauty up to Disney Animation’s 60th feature film, Encanto. Not only will fans get a whole new song, but state-of-the-art projections will light up the facades of Sleeping Beauty Castle, Main Street, U.S.A., and “it’s a small world.”

This all-new nighttime spectacular will celebrate 100 years of Walt Disney Animation Studios in an experience that ignites the dreamer in all of us. “Wondrous Journeys” will feature nods to every film released by the iconic studio over the past century, with music, characters and special moments from favorite stories including “Encanto,” (depicted above), “Hercules,” “The Princess and the Frog,” “Peter Pan,” “Frozen,” “Treasure Planet,” “Big Hero 6,” “Moana,” and more. Also returning to Disneyland in 2023 will be the still-new Magic Happens daytime parade, as well as Mickey’s Toontown, with the addition of Mickey and Minnie’s Runaway Railway.