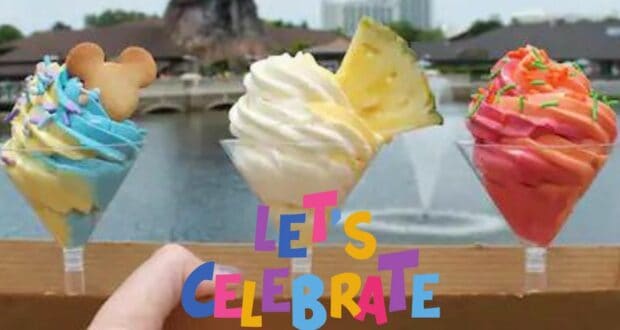 If you need a particular reason to celebrate a holiday in the middle of the summer, then Disney has an easy one for you on July 21: it’s Dole Whip Day! On Dole Whip Day, Walt Disney World Resort Guests or Disneyland Resort Guests can take special care to enjoy as many fun flavors of Dole Whip as they can in a day (while Disney fanatics who are back at home can try to eat a similar dessert for their own non-vacation-related Disney magic).

Dole Whips can be found at Walt Disney World Resort, Disneyland Resort, and onboard cruise ships from Disney Cruise Line. They can also be found by Disney Vacation Club members who are visiting Disney’s Hilton Head Island Resort in South Carolina or Disney’s Vero Beach Resort!

Looking for DOLE Whip paradise? Look no further than @WaltDisneyWorld! Celebrate DOLE Whip Day by checking out some of the countless flavors available. 🍍 pic.twitter.com/jaZq5rOmUq

Dole Whips are now one of Disney’s most iconic desserts or sweet treats, and Disney has capitalized on Dole Whip’s popularity by coming up with multiple seasonal flavors or Disney-character-themed flavors; however, pineapple, vanilla, and swirl Dole Whip are still classics. Pineapple is particularly iconic!

The Disney Parks Blog recently shared some particularly popular flavors, including the Dole Whip Raspberry-Lemon Float from the Tropical Hideaway that is found within Disneyland Park. This aesthetically pleasing and summery treat is apparently “a coconut-rimmed cup filled with a refreshing blend of Passionfruit-Orange-Guava Juice and topped with a swirl of Dole Whip Raspberry and Lemon, fresh strawberries and mangoes, plus dried kiwi, and hibiscus”.

If any of the ingredients in that Tropical Hideaway Dole Whip are not your thing, no need to worry: there are many, many Dole Whip flavors! A few popular choices are the Pineapple Float, Scar’s Lair, an adorable and whimsical Dole Whip Flight from the Disney Springs establishment called Swirls on the Water (for Disney Guests who prefer sample sizes), the Simba Sunset, the I Lava You Float, and some very special limited-edition Walt Disney World Resort 50th Anniversary Dole Whip offerings!

The special Dole Whip celebration lasts from July 21 to July 24, but you can enjoy some Dole Whip desserts any time in the Disney Parks or Disney Resorts! Are you a fan of Dole Whip, and is it a staple for your Disney vacations? Which do you prefer: the iconic Mickey Mouse ice cream bar that serves as a popular dessert choice in Disney Parks, or any form of Dole Whip? Let us know on Facebook, and happy Dole Whip Day!