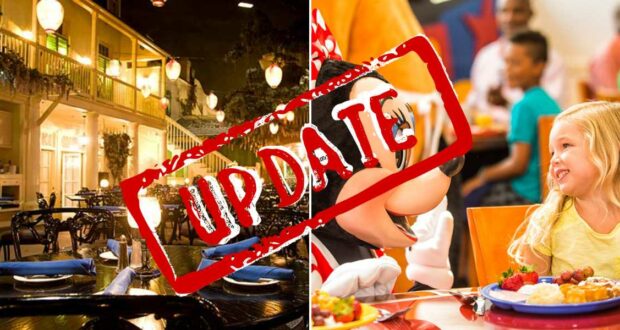 The rumor of Disney’s change of their cancellation policy for dining reservations has officially been confirmed.

The Walt Disney World Resort is one of the ultimate havens to experience the Disney magic and live the Disney experience. This isn’t only because of the wonderful rides and attractions—think, “Haunted Mansion,” “Jungle Cruise”—that each Theme Park in the Disney Resort boasts, it’s also for the incredible dining experiences, character dining, and the wholly immersive atmosphere that each Disney Park—Magic Kingdom Park, Disney’s Hollywood Studios, Disney’s Animal Kingdom and EPCOT—also offers.

One of the main points of note when it comes to going to the Disney Parks is the need for reservations and prior planning. The Parks are crowded and making sure that you as a Guest have reserved, in advance, the experiences you’d like to have or the restaurants you’d like to eat at can be incredibly helpful to ensure you actually get to have that experience.

A few weeks ago, Journalist Scott Gustin took to Twitter to share a then-unconfirmed rumor that the Disney dining reservation policy with respect to cancellations had changed, letting fans know that reservations could now be canceled up to two hours prior to the reservation time.

Disney has also officially confirmed the change I mentioned a few weeks ago about dining reservations being available to cancel up to 2 hours prior to your reservation time. I know a few people assumed this was a glitch – it's not.

On November 3, 2022, Gustin shared a screenshot of his reservation for the Chefs de France Lunch at EPCOT, with it sharing his suspicion of this new development and the possibility of canceling dining reservations in the Walt Disney World app provided it was at least two hours before the reservation time. He had also clarified that this would likely not apply to restaurants that required prepayment like Cinderella’s Royal Table, among more.

It appears you can now cancel dining reservations in the Walt Disney World app if it's at least 2 hours before your reservation.

In the thread, Gustin had also gone on to explain that for Guests who did try to cancel within two hours of the reservation, they will see the “Please call to cancel” message, and would need to call or modify to a future date/time. While at the time, many Guests and fans had been quite certain it was a glitch and had mentioned the cancellation fee that comes along with same-day cancellations, Gustin clarified that Disney didn’t charge a cancellation fee for a successful cancellation, only a no-show.

This change could allow for more Guests to be able to have their dream Disney dining experiences even if the restaurant appears fully booked when making their plans, and has the potential to also support more walk-in customers.