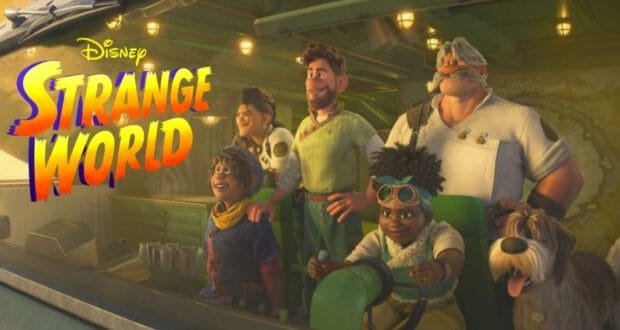 Among the announcements and updates of new and ongoing movie projects at Disney and Pixar, there was one from Walt Disney Animation Studios that appeared to this writer to be a bit overdue.

The news was shared with some new “never-before-seen” visuals from the upcoming sci-fi family adventure, and that was then shared on Twitter by D23, and they said,

“Get lost in this very STRANGE new look at Disney’s #StrangeWorld and see the movie in theaters November 23, 2022.”

Get lost in this very STRANGE new look at Disney’s #StrangeWorld and see the movie in theaters November 23, 2022. pic.twitter.com/uLw4A4QROL

While this may seem to be a bit of an obvious statement that does not need to be said, this writer has been suspicious of the possibility of a straight-to-streaming release since the first trailer and poster were released. Simply put, there was no confirmation. Today, with Disney’s Kareem Daniel handling distribution, one cannot help but be a bit skeptical as to whether or not the powers that be would be willing to take the chance on a high-costing theatrical run, especially when we know that Disney’s Strange World will feature Disney’s first openly-gay teenager. This adventure also packs a star-studded cast that includes the likes of Dennis Quaid and Jake Gyllenhaal.

“Being here is so cool and to share this trailer for the first time,” Jake said. “I’ve always wanted to be in a Disney animated movie so it’s kind of a dream come true.”

“I love being part of the Disney family,” echoed Dennis. It really has been very, very good to me. I play Jaeger Clade. I’m Searcher’s father and it’s a really different kind of character for me. He’s got huge calves, for one thing. Jaeger’s a world famous explorer in his strange world, an adventurer. He’s stubborn but he’s a lot of fun – opinionated but, you know, take him as he is.”