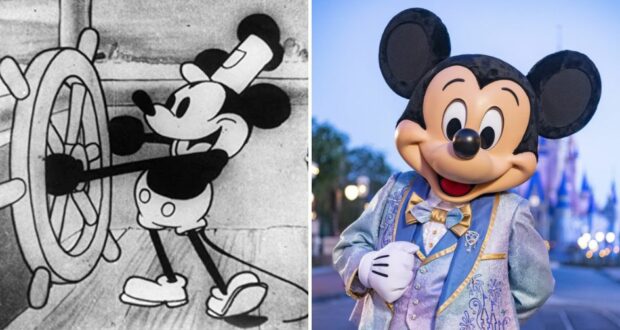 Disney Is Losing Select Rights to Mickey Mouse: Here’s What to Know

In January 2022, Winnie the Pooh and his friends in the hundred-acre woods became public domain. The good news is Disney’s rendering of the characters including Winnie the Pooh, Eeyoe, Tigger, Piglet, Kanga, and Roo are still protected. But, the original sketches of Winnie-the-Pooh books by A.A. Milne are now open for adaptation.

Well, yes, to some degree. The early version of Mickey Mouse from 95 years ago is scheduled to move into the public domain in January 2024 under U.S. copyright law. Like Winnie the Pooh and friends, however, Disney’s modern adaptation of Mickey Mouse will remain safe.

Of course, we Disney fans are still in a panic… because what do you mean by “ONLY” Steamboat Willie?! That’s Steamboat Willie! That is the original Mickey Mouse and with his best girl, Minnie Mouse.

Once Steamboat Willie enters the public domain, artists and companies are welcome to try their adaptation of the early Mickey Mouse character, as long as the look of Mickey remains far enough away from Disney’s current, modern-day Mickey.

Mickey in a horror film like Winnie the Pooh? Yes, it’s a possibility… along with the famous Mouse being in other books, commercials, and adaptations that could be as seedy as some of the new Winnie the Pooh creations.

The look of Mickey Mouse as Steamboat Willie cartoon character may be different from the Mickey Mouse we all hug in the Disney Parks today… but it’s still very much like the beloved Mickey Mouse.

What is Disney doing to stop this? As we previously shared, there have been Mickey Mouse special protections which we first saw unfold in 1984 and again in 2003 to extend the public domain of Mickey.

Unfortunately, with Disney being the spotlight among controversial issues in Florida and beyond, it seems like more and more lawmakers are challenging The Walt Disney Company, which may eliminate any potential extension to override the public domain of Mickey Mouse.

So, yes, as of right now, Mickey Mouse, in his earliest Steamboat Willie form, will become public domain in January 2024 unless Disney works magic to close the public domain door for the Mouse.