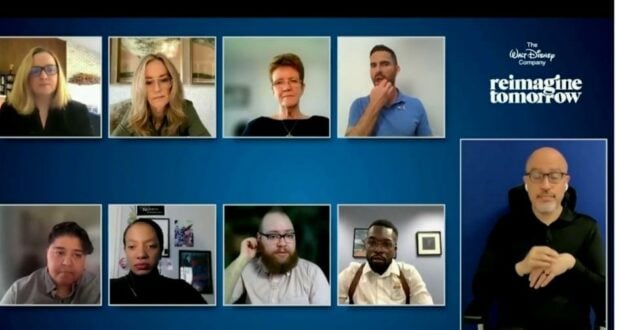 Leaked footage of an All-Hands meeting at the Walt Disney Company regarding Florida’s Parental Rights in Education Law shows the executives and higher-ups outright planning to inject more LGBTQ+ content into children’s programming.

First up is Executive Producer Latoya Raveneau, who said that the allowance–and even push–for what she called her “not-at-all-secret gay agenda” was already in motion when she got to the studio.

“On my little pocket of, you know, Proud Family Disney TVA, the showrunners were super welcoming … to like, my, like, not-at-all-secret gay agenda. Maybe it was that way in the past, but I guess, like, something must have happened… the momentum that I felt, that sense of ‘I don’t have to be afraid to, like, let’s have these two characters kiss in the background.’ I was just, wherever I could, just basically adding queerness… No one would stop me, and no one was trying to stop me.”

SCOOP: I've obtained video from inside Disney's all-hands meeting about the Florida parental rights bill, in which executive producer Latoya Raveneau says her team has implemented a "not-at-all-secret gay agenda" and is regularly "adding queerness" to children's programming. pic.twitter.com/eJnZMpKIXT

Then General Entertainment President Karey Burke got up and declared that the company must introduce more characters who self-identify and something other than “straight” and “cis-gendered.”

“I’m here as the mother of two queer children, actually, one transgender child and one pansexual child, and also as a leader,” Burke said. Her goal is to increase the number of LGBTQ+ and other minority-representing characters to 50% of total leads.

SCOOP: Disney corporate president Karey Burke says, "as the mother [of] one transgender child and one pansexual child," she supports having "many, many, many LGBTQIA characters in our stories" and wants a minimum of 50 percent of characters to be LGBTQIA and racial minorities. pic.twitter.com/oFRUiuu9JG

Disney Production Coordinator Allen March followed that goal with a means by which leaders can see its fulfillment: His team has launched a “Tracker” to ensure the number of “gender-nonconforming characters,” “canonical trans characters” and “canonical bisexual characters” is sufficient.

It appears that despite parental and fan disapproval, The Walt Disney Company is steamrolling ahead with its decision to create this new type of content.

We at Disney Fanatic will continue to keep our eyes on this story and will update our readers as more news regarding Walt Disney Television Animation and all other Disney shows and movies comes to light.