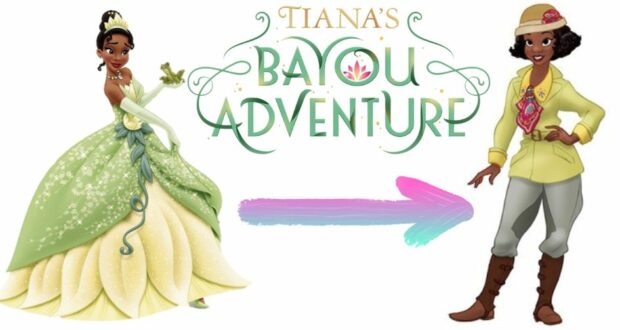 Fans of the Disney princess Tiana (the protagonist from the 2009 animated Disney movie The Princess and the Frog) were pleased to learn that the New Orleans native was getting her own ride in the Magic Kingdom — even if fans of Splash Mountain were upset to learn that the classic water ride was being replaced. Now, Disney has announced both the name of Tiana’s new ride and the look that the Disney princess will be sporting along the way!

D23 spoke to costume designer Ida Muldrow and cosmetology manager Tisa Powell, from Disney Live Entertainment, about Tiana’s new outfit (which, according to D23, is just one of multiple outfits that will be worn by Tiana on the attraction). Apparently, Walt Disney Imagineering told Ida Muldrow and Tisa Powell that “they wanted to keep everything authentic and true to the ethnic background of African Americans”. “The parameters were to stay true to who Tiana represents — African Americans — and to stay in the era of the film [the 1920s],” Powell explained. 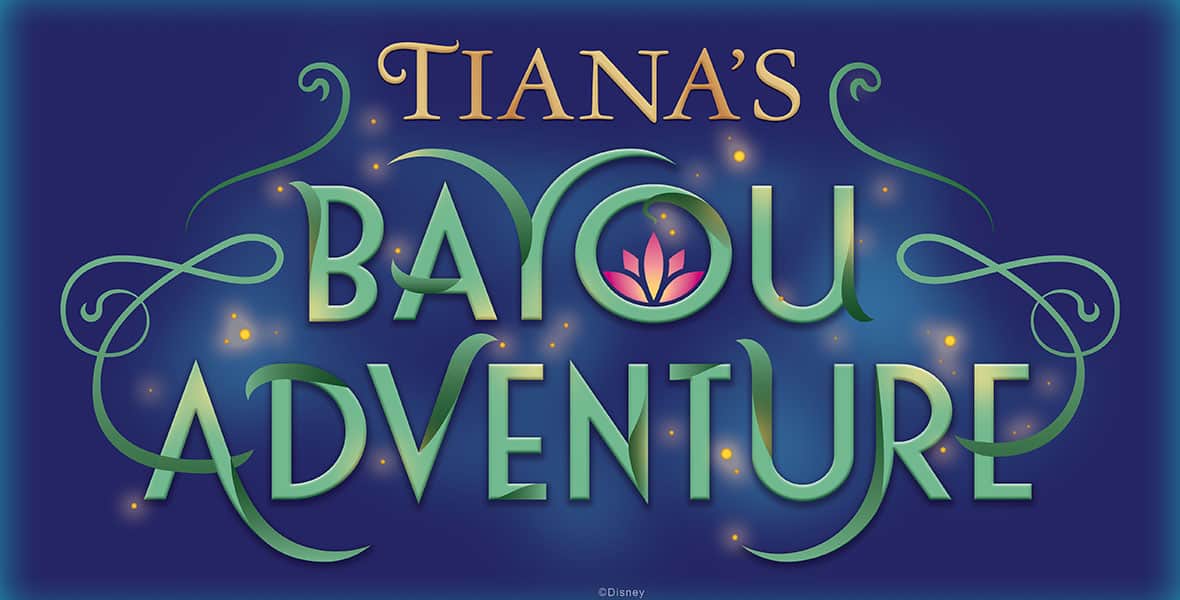 “Right away, I had a lot of questions,” Muldrow said. “Did ladies wear pants? What did African American women wear? What does a young, Southern woman who’s married wear when she’s going into the bayou? Those are the kinds of questions we had to ask in our research.” “The goal was to be authentic,” she added. “Even though it is a fairy tale, it’s extremely important to bring out the pride and the dignity of the African American culture at the time.”

Tisa Powell also pointed out that “one of our goals was to represent the different hairstyles that African American women wore back in those days. I think it’s great that Tiana is representing that era [in Tiana’s Bayou Adventure] with a beautiful hairstyle that is true to what African Americans wore then.”You can see Princess Tiana’s hairstyle in the image below! 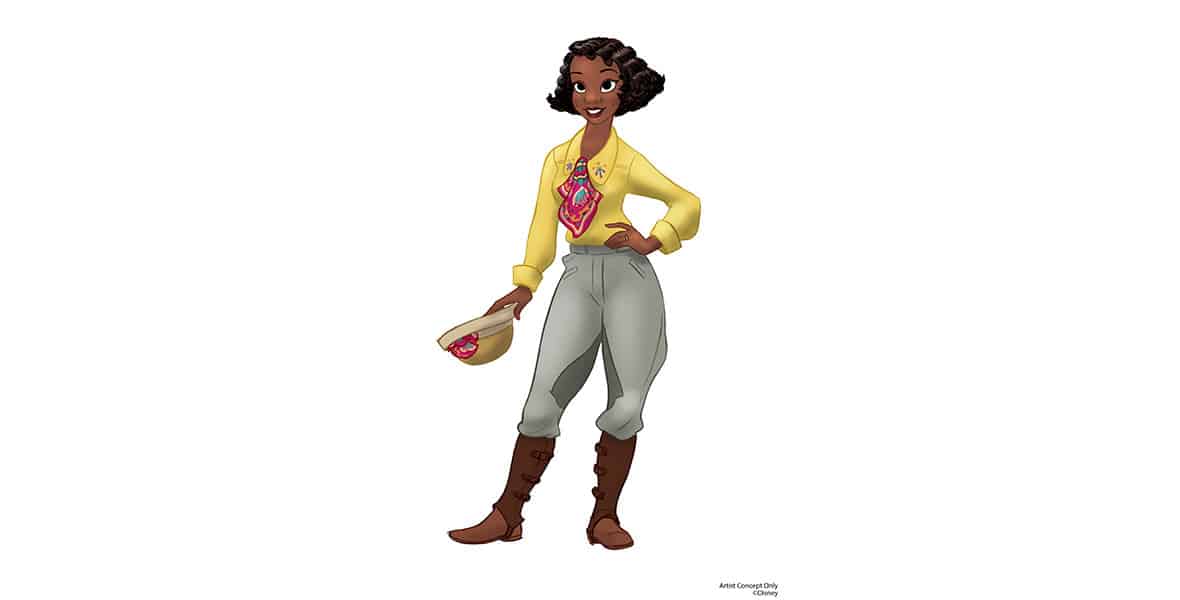 The concept art shown above is from Walt Disney Imagineering and is apparently Tiana’s bayou outfit (since part of the ride takes Guests through the bayou). Costume designer Muldrow apparently “drew added inspiration from the military and equestrians, as well as The Princess and the Frog itself”.

“In the film, Tiana always wore lemon yellows and greens — these soft colors that you might even see on a lily pad,” the costume designer explained. “I needed to stay within that color palette. Once I understood that those are symbolic colors for her character and her personality, I ‘earthened’ it; I couldn’t keep it bright. You’ll see a saffron green — or chartreuse. It’s not just green and yellow, because I had to take into consideration the lighting and the background.”

Keep an eye out for little details like the tiny flowers embroidered on Tiana’s collar! Tiana’s cloche hat might be more obvious, but it was also a significant accessory. “I imagined she is a person who walks into the bayou very often and gathers her own straw grass,” Muldrow told D23. “She hangs it up in a bundle and dries it, then crochets it into a hat. We used natural things right from the swamp.”

The Walt Disney Imagineers put a lot of thought into the fabric making up Tiana’s costumes on the ride, too. “Tiana’s gaiters would have been weighed on a very heavy cotton canvas. But those are natural, man-made fibers,” Muldrow said. “For this attraction, we have to be realistic. There’s going to be moisture, so we can’t use natural linen or cotton; they can break down in a matter of years. Tiana’s costume is going to be polyester-rich, but it is going to look like linen.” 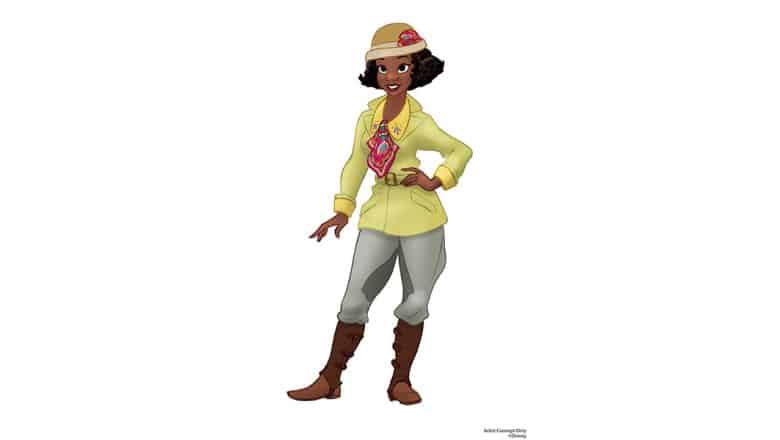 Likewise, Tisa Powell used “authentic, high-quality materials” for Tiana’s hair.  “Now, we can show that there are different textures to African American hair,” the cosmetology manager said, adding that she was “relieved” by that because “the hair industry as a whole has evolved, [but] it did not always have hair that represented African Americans.”

Tisa Powell kept the look accurate by keeping 1920s hair-styling tools in mind, too. “Back then, it was the hot comb; it wasn’t a relaxer,” she explained. “But there’s a difference in the texture of the hair when you use a hot comb versus a relaxer. So, for Tiana being in the bayou, we actually pressed her hair in Marcel waves. It’s perfect for her.”

Tiana’s Bayou Adventure should be opening in Disneyland and Walt Disney World towards the end of 2024, but Powell expressed a hope that the ride will bring about a “sense of pride” for African Americans once it does open. “A lot of people will talk the talk, but Disney has talked the talk and they’re walking the walk by creating an attraction centered on its first African American Princess,” Powell told D23. “I hope people feel overwhelmed with happiness and joy — Disney thought enough about Tiana to create this attraction.”

Are you excited about Princess Tiana’s ride — and her new TV show, which will also be set in the 1920s?