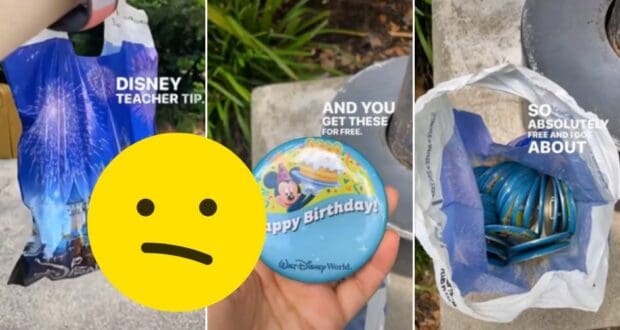 The new school year has officially begun! While Walt Disney World Resort and Disneyland Resort are clearing from the summer crowds, kids are getting back to school, and teachers are once again working their usual magic in the classrooms. But, when one teacher posted a “Disney Teacher Tip,” it went viral, getting the attention of Disney fans and ensuing a debate.

One of the best tips when visiting the Disney Parks is to be sure Guests snag one of Disney’s celebration buttons. They are available from select Cast Members at locations such as Disney Resort Hotels and Guest Relations within the Parks. Every visit to Disney is a celebration, so snag a pin and show it proudly!

With these celebration buttons being a free item, one Disney fan and teacher had the idea to share the excitement with her classroom. She took to social media with a “Disney Teacher Tip,” which has since gone viral… but also sparked a debate.

@rocketcityteacher shared a “Disney Teacher Tip” TikTok video, noting, “If you visit any Disney parks for summer break, don’t forget to get your next class a set of buttons to give on their birthday! I will do half birthdays for those with summer birthdays. They are free. Ask any cast member where you can get FREE birthday buttons and they will direct you. I got mine at a gift shop at Animal Kingdom.”

It is very generous for Disney to give her 30 free buttons for her classroom. But is this abusing the freebie Disney system? The comments to the video are both in support of the idea for teachers, saying, “Thanks, others have shamed you for this, but they do not understand the struggle,” as well as against the idea commenting, “And this is why they take stuff out of the parks! Abuse of free items is sad!”

@sthooch, a former Disney Cast Member, saw the video and follow up with his opinion about the Disney teacher tip, stating, “I may lose some followers on this one.” Here’s the video below:

As stated in the video, @sthooch, who had a school teacher for a mother, notes, “You’re going to lose this benefit because of greed.” With the number of teachers that go to Walt Disney World, his concern is this viral video could cause Disney to remove the celebration button benefit because of people taking advantage of the system. He adds, “Stop doing it. You’re ruining it for everyone else.”

When @sthooch realized his thoughts went viral on TikTok, he shared a follow-up video, intending to have full “Transparency” to his previous message, as shown in the video below:

As he says in the video, “If you have an opinion, voice it,” but also shares why he had to block some followers, not because of their opinion but because of bashing him or his other followers.

The comments among the three posts are split. Some are in full support of this Disney teacher tip and say they will be sure to take advantage of it the next time they are in the Disney Parks. Others say, please don’t, as Disney will pull the freebie offer due to abuse, comparing it to the “free shirt hack” that Disney caught onto.

Is a teacher asking Disney for 30 celebration buttons ok, or is it abuse of Disney’s free offer? The debate continues on social media. Only time will tell if Disney needs to change its current celebration button distribution process.