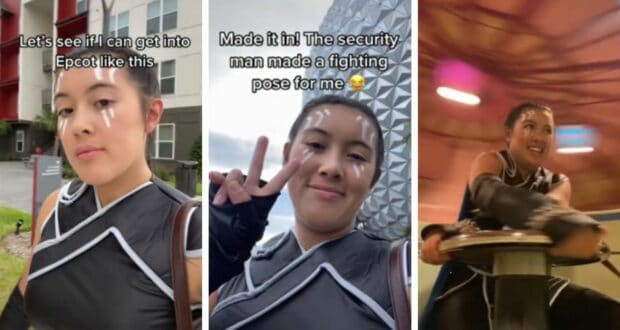 Disney security at Walt Disney World Resort recently allowed a Guest to enter not one but seemingly two Disney Parks in a costume. The Guest took to social media to share the successes of the violation.

The Disney dress code has been met with debate and questions of inconsistency recently. It wasn’t too long ago that Guests showed up at Disney Parks wearing short, revealing crop tops to see if they could take advantage of the “free shirt hack.”

Thankfully, Disney quickly caught on to the free Disney shirt hack, and now if a Guest is in dress code violation, they will either need to purchase a new shirt or go back to their Resort or vehicle to change before being allowed to enter the Park.

A Disney Guest was wearing a long princess-style gown recently in the Parks. Disney security asked her to change due to the violation of her dress material dragging on the ground.

“Foul” shirts have also been the center of the dress code debate, as a Disneyland Resort Guest was spotted in the Parks with a shirt that had obscene language.

And while costumes on adults are not allowed except for Magic Kingdom’s Mickey’s Not-So-Scary Halloween Party, new videos have surfaced of a Disney visitor attempting and succeeding in entering both EPCOT and Magic Kingdom Park in a costume.

@bella_billnye dressed up like Marvel’s Valkyrie attire in full costume, including a cape and makeup. In her first TikTok video it was posted with, “Let’s see if I can get into EPCOT like this,” as shown in the post below:

In the second video, @bella_billnye posted a video noting, “Made it in! The security man made a fighting pose for me.”

Another video where it looks like it was later in the evening with the note, “Give me some Halloween characters I should dress as for Halloween.”

Disney’s dress code clearly states Guests will be in violation if they wear “Costumes and costume masks, which may not be worn by Guests 14 years of age or older. Exceptions: Specific Halloween and Christmas events” into a Disney Park.

Is the theme park having a dress code inconsistency issue, or is it ok that they let this costumed dressed Guest into EPCOT and Magic Kingdom?