Disney World Resort Hotels We Love Most and Why 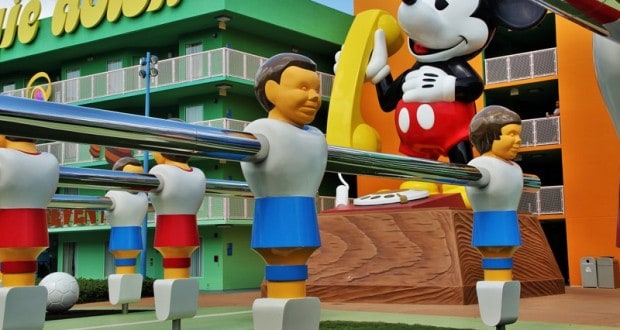 Walt Disney World Resorts come in many distinctions, from the comfort and affordability of Value Resorts to the more lavish multi-room accommodations to be experienced on premises at Deluxe Villa Resort properties. Each property designation stands out as uniquely original, with one-of-a-kind theming only that resort is known for and offering its own distinctive niches and attributes. But wherever you choose to stay, all Disney World Resorts feature the same stellar services and complimentary amenities, including free transportation, the chance to utilize Extra Magic Hours for extended park time, onsite recreations, and many other magical guest-only exclusives. We’ve taken a look at the many different hotels making up Walt Disney World Resort and compiled this list of our own personal 10 favorite picks.

Older nostalgic guests and youngsters alike find much to marvel at while staying at this hip Value Resort. In celebrating the diverse decades and changes among the pop cultural crazes of the 20thcentury (with focus primarily falling to the 1950s through 1990s), Disney’s Pop Century truly makes for an amusing atmosphere to take in and appreciate. Unlike the previous All-Star properties that came before, Pop Century was the first-ever Value Resort to feature three on-premises pools rather than the typical two-pool standard that was formerly the norm.

The resort is comprised of 2,880 rooms located within 10 separate four-story buildings. Onsite highlights include an arcade, delightfully versatile food court, and an outstanding combined gift shop. From the larger-than-life icons highlighting old and new entertainments and amusements alike to the many intricately laced displays and popular references that blend different generation gaps throughout the years, reasons to love Disney’s Pop Century Resort are seemingly innumerable. And as future plans for the Disney Skyliner gondola system are revealed, it seems we can look ahead to even more reasons to love this resort, as it will be included on the line for folks looking to travel to both Epcot and Hollywood Studios.

2. An animated choice - Art of Animation

Just when you thought Disney’s Value Resort properties can’t get any better than Pop Century, Disney’s Art of Animation opened up right across Hourglass Lake back in 2012. Plans for what was originally supposed to be a continuation of the Pop Century Resort—a side known as the “Legendary Years” highlighting the earlier half of the 20th century—were halted in the early 2000s and then later reimagined into a brand new concept celebrating the animation of Walt Disney classics. The four animation themes highlighted here are taken from such films as The Little Mermaid, Finding Nemo, The Lion King,and Cars. Disney’s Art of Animation is unique in many ways, so much so that while it is still considered a Value Resort for all intents and purposes, it marks the founding of a new Disney Resort category known as a “Value Plus Resort.”

That’s because the majority of the rooms here are actually family suites designed to sleep up to six adults. With the exception of All-Star Music no other Value Resorts feature family suites, yet Disney’s Art of Animation boasts 1,120 suites and 864 standard rooms. The resort is comprised of 10 different buildings among its four themes and three onsite pools, including what is the largest and arguably best resort swimming pool to date in all of Walt Disney World—the Big Blue Pool. Other resort highlights include an arcade, diverse dining options from the Landscape of Flavors food court, and fun finds within the Ink & Paint Shop. Things are about to get even more animated here as well as this resort will also be linked to the upcoming gondola system.

Discover the beauty and enchantment of Spanish Colonial Mexico at the rustic yet regal Moderate Resort known as Coronado Springs. From stucco walls to terracotta roofs, the romantic spirit of the southwest can be felt everywhere in the charming décor and overall style this resort emanates. In total, Coronado Springs boats 1,921 guest rooms, with 43 of those rooms being suites. Accommodations are spread out amongst three distinct villages—the Casitas, the Cabanas, and the Ranchos. From on-premises swimming pools, to the full health club and spa/massage services you can enjoy at La Vida Health Club, we can list plenty of reasons why this resort ranks highly on our list of fan favorites. It also happens to be the only Disney Moderate Resort to feature an onsite business center. And let’s not forget lavish restaurant dining with Maya Grill, open for dinner daily and featuring an enticing array of Nuevo Latino options.

Then there’s the plentiful food court, El Mercado de Coronado to consider also, as well as Rix Sports Bar & Grill, Café Rix, and even full bar service options with Laguna Bar. And like all Walt Disney World Resorts there are seemingly unending onsite recreations and activities taking place here throughout the day. Some of these include campfire activities, movies under the stars, volleyball nets, playgrounds, and more. Please note however, that this resort is currently being renovated and some of its usual amenities, like the Iguana Arcade, Lost City of Cibola Pool, Dig Site play area, and Siestas Cantina, are currently unavailable to guests. But once everything is complete, Coronado Springs is expected to be a much bigger and even better resort with a 15-story tower (The Gran Destino Tower) to serve as the new entrance, complete with a two-story lobby, 545 additional guest rooms (including 50 suites), and new dining opportunities added to the mix as well. Overall completion is slated for July 2019.

As the very first Disney Resort I ever stayed at on my first-ever trip to Walt Disney World at the age of four, I am admittedly partial and nostalgic for Disney’s Caribbean Beach. And I’m not alone, because countless visitors agree that this island-themed Moderate Resort known for its layback tropical island flare, bright and colorful décor, and overall happy and carefree atmosphere makes for a most relaxing retreat to complement the hustle and bustle of a busy day spent in the parks. Caribbean Beach Resort is comprised of five housing sections all named for different Caribbean Islands—Jamaica, Barbados, Aruba, Trinidad, and Martinque. Rooms range from vibrant colorful choices to the newer, ever-popular pirate-style picks.

Resort-wide recreations are plentiful here, with swimming at the famed zero-entry pirate-themed Fuentes del Morro Pool being a number one pick. Additionally, there are five leisure pools to enjoy onsite as well, along with other fun like bike rentals, jogging trails, playgrounds, guided fishing excursions and other boat/cruise outings, campfire activities, nighttime movies, and more. And don’t forget about the impeccable onsite dining options here, ranging from vast and versatile quick service meals or grab and go items at Centertown Market to newly renovated island-inspired sit-down delights like Sebastian’s Bistro and Spyglass Grill. You’ll also find quick picks for snacks available at Island Markets and an enticing array of both tropical spirited and regular spirited drink selections at Banana Cabana.