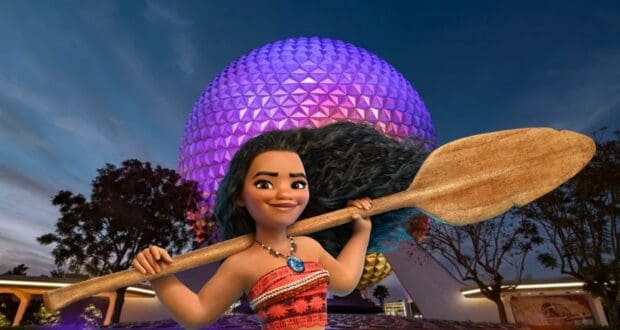 EPCOT has been undergoing massive construction as Disney works to transform the Park. The former split lands of the Disney Park, including Future World and World Showcase, are now being transformed into four neighborhoods, including World Celebration, World Discovery, World Nature, and World Showcase.

With much of the focus on World Discovery and its recent welcome of Guardians of the Galaxy: Cosmic Rewind, we’re shifting attention over to World Nature, where the new Moana attraction is in development.

“Journey of Water Inspired by Moana” has begun to go horizontal as new images show the rock development of the highly-anticipated attraction.

Disney describes the new experience with, “Journey of Water, Inspired by Moana will be the first Disney Parks experience evoking the hit Walt Disney Animation Studios film. This lush exploration trail will invite guests to meet and play with magical, living water. Just like Moana’s friend the ocean, water will have a personality of its own, helping guests learn how to protect the natural water cycle in a fun and engaging way.”

New photos from July 16, 2022, were posted by @bioreconstruct as we take a look at the current construction. In the photo below, you’ll spot several passageways within the rock work:

Here’s an excellent overview photo of the attraction’s progress:

More rock work has been erected for Journey of Water:

In the photo tweets below, you’ll see the black framing, which may be the standby line and Lightning Lane entrances for Journey of Water Inspired by Moana:

And while yes, right now, it looks like there is a long way to go – we’re thrilled to see the progress! We recently announced it had been 5 years since the announcement of TRON Lightcylce Run was announced for Magic Kingdom… and we’re still waiting on that attraction to be complete.

With the seemingly fast construction of Journey of Water Inspired by Moana, we’re hoping the attraction will welcome Guests soon enough, although Disney has yet to announce a completion timeframe.

In the meantime, if you need a dose of Moana while visiting Walt Disney World Resort, check out the newer Moana-themed rooms at Disney’s Polynesian Village Resort!