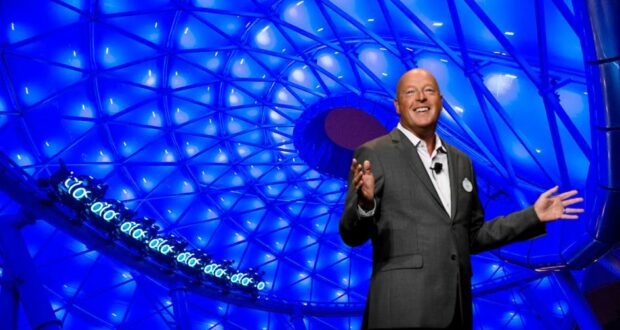 One of Disney’s most highly anticipated attractions is the new TRON Lightcycle Run rollercoaster that is currently under construction at Magic Kingdom Park. But, as we roll through 2022, the realization that the Disney Park attraction has taken five years to construct has set in.

While we have seen excellent progress this year with the massive white canopy that stretches over the roller coaster being tested for its lighting work, as well as ride vehicles moving over the tracks… the current state of the attraction is still a massive construction zone.

On July 15, 2022, @DrewDisneyDude posted Disney CEO Bob Chapek‘s D23 announcement that TRON would be coming to Magic Kingdom Park at Walt Disney World Resort. The announcement was made five years ago, on July 15, 2017:

Sadly, at the end of the video, Chapek notes they are working on completing the new Tomorrowland rollercoaster by the 50th Anniversary of Walt Disney World Resort… which was October 1, 2021.

In defense of Disney, COVID closures and delays most definitely don’t help with the sluggish progress of the TRON Lightcycle Run.

So, where are we currently… 5 years later, with TRON Lightcylce Run at Magic Kingdom? @bioreconstruct took to social media to share photos of TRON’s progress as of July 16, 2022.

In the photo below, @bioreconstruct notes, “Wider than normal photo of the covered area near the Tron attraction entrance. Arrow directed at some of the translucent covering.”

It looks like restrooms near the TRON building will be available, with @bioreconstruct noting, “Current work at a building along the Tron access walkway. Believed to be restrooms for this area” with the image below:

Missing the beloved Walt Disney World Railroad? Here’s a look below at the current concrete forms at a plaza at the base of the TRON walkway over the steam train tunnel. @bioreconstruct notes, “Arrow at next sections of the wall along the steam train route. Separating the train from the plaza.”

The Walt Disney World Railroad closed on December 3, 2018, to make way for the construction of TRON. Disney has teased on occasion the plans to return the trains soon, but construction of the tracks through TRON seems like it’s been a major project.

Here’s another steam train note in the photo below where @bioreconstruct points out, “Steam train tunnel through Tron can be spotted from the PeopleMover queue.”

Lastly, Disney is installing speakers in the area, along the TRON access walkway, as shown in the image below. @bioreconstruct comments that “The slots at sides might be for LED lighting strips.”

If you simply can’t stand the wait any longer, Magic Kingdom’s TRON is said to be similar to Shanghai Disneyland’s TRON coaster, which opened in June 2016. Check out the full ride video below to see what the experience will be like at Disney’s Magic Kingdom:

Five years is a long time to build a single roller coaster for Walt Disney Imagineering. But, alas, we believe the ride will be worth the wait. Unfortunately, no opening date or timeframe has been revealed since the initial announcement in 2017.