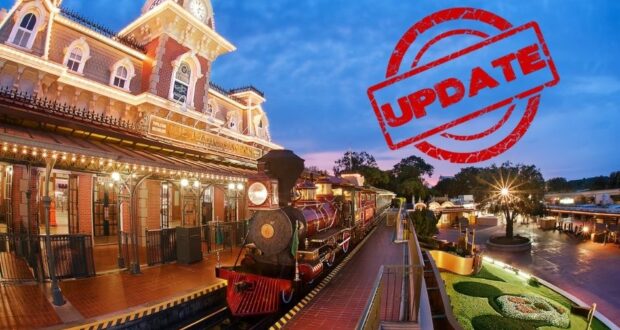 Walt Disney World Resort has been the hub of much transformation. From EPCOT’s overhaul into four neighbors and new Guardians of the Galaxy: Cosmic Rewind coaster to the long-awaited rollercoaster known as TRON Lightcycle Run at Disney’s Magic Kingdom, it’s been a long waiting game with COVID delays.

While we’re eager to welcome TRON Lightcycle Run to the Tomorrowland portion of Magic Kingdom, the construction of the massive roller coaster has caused a delay in the reopening of the fan-favorite Walt Disney World Railroad which closed on December 3, 2018, and has been quiet since.

Disney has teased some movement with a behind-the-scenes video of the steam train, but without tracks between the Fantasyland Station, through the TRON Coaster, it’s no surprise the train is still on hold.

But, great news as on May 25, 2022, @MickeyViews took to social media to share a video at the Fantasyland Station at Magic Kingdom Park. You’ll spot tracks being placed between TRON Lightcycle Run and the train station:

YES! That’s construction we’re so happy to see. Disney has yet to announce when the Walt Disney World Railroad or TRON Lightcycle Run will open, but we’ll take any piece of forward progress we can get!

The locomotive was one of Walt E. Disney’s dreams come true. It consists of three stations including Main Street, U.S.A. train station, the Frontierland station, and the Fantasyland station as it completes its 20-minute, 1.5-mile scenic round-trip tour around Magic Kingdom Park.

We’ll be sure to share further updates as Disney works to return the Walt Disney World Railroad back to its iconic Disney Park.