Experiences You Absolutely Should Have Around Epcot's World Showcase 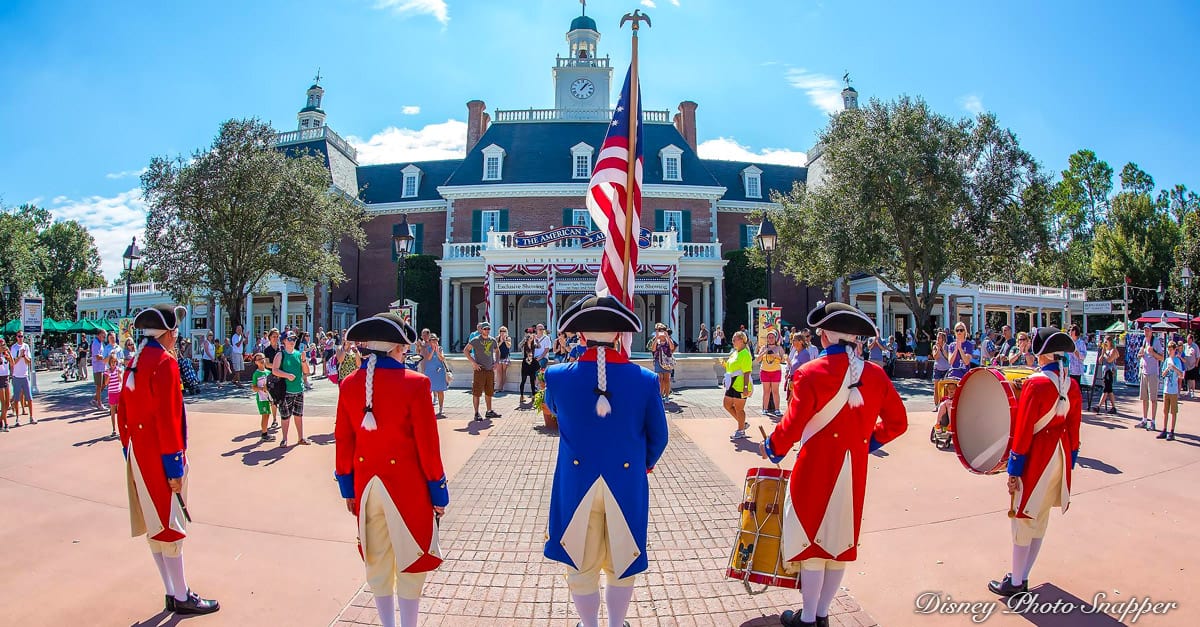 At the center of Epcot’s World Showcase is none other than the American Adventure Pavilion. Here the primary must-see attraction is a wondrous 30-minute presentation housed within the walls of the pavilion’s stately grand edifice. It combines lifelike animatronics on stage as well as audio-visual video footage projected onto a 72-foot screen in an overall exploration of innovation, independence, and individualism throughout the history of this great nation. Your hosts to guide you along the way of this historic journey are Mark Twain and Benjamin Franklin. Other notable figures to make appearances include Thomas Jefferson, Theodore Roosevelt, Susan B. Anthony, Frederick Douglas, Alexander Graham Bell, and many others. It’s a show that will leave you feeling patriotic and proud with your head held high. In addition to the main presentation, the grand building is also site to the fascinating American Heritage Gallery and is also a place where Voices of Liberty, the pavilion’s own a cappella singing group likes to visit and serenade guests within the stately halls.

In addition to the aforementioned Voices of Liberty and previously noted British Revolution rock band, Epcot’s World Showcase is home to many other live performance acts as well, taking place along the streets and at various designations within the many representative nations. From the Mariachi Cobre in Mexico to the Jeweled Dragon Acrobats in China, Matsuriza drumming in Japan to belly dancing in Morocco, Italy’s renowned street juggler Sergio to France’s famed acrobatics team Serveur Amusant, and of course those wandering Vikings in Norway who are more bark than bite. You simply can’t miss any of these national exclusives. Other entertaining points of interest to consider include live entertainment at Canada Mill Stage in the Canada Pavilion and the America Gardens Theater at the American Adventure Pavilion.

13. Catching up with Disney characters

Because Disney’s diverse characters all hail from specific regions throughout the world, it’s no surprise that you can find various characters along at the many different national pavilions. At Mexico, for instance, don’t be surprised to find Donald Duck quacking about in a traditional poncho and sombrero. While Daisy isn’t there, you will find her ready and waiting near the World Showcase Plaza. Germany is where you will find Snow White waiting for you angelic as always. Mulan can be found in China, while Jasmine is out and about in Morocco. France is where you will find both Belle and Princess Aurora, while the United Kingdom plays host to a versatile array of characters, including beloved favorites like Mary Poppins and Alice (Alice in Wonderland). We already mentioned that Norway is the place to find Anna and Elsa, but did you know it’s also where you’ll find many of your other favorite Disney Princesses all under one roof? Just head to Akershus Royal Banquet Hall for Princess Storybook Dining to get your fill of both food and fun. The usual attending princesses here include Cinderella, Snow White, Ariel, Princess Aurora, and Belle, but others have been known to stop in at various times also.

While we’re on the topic of dining, it’s also worth mentioning the many other delicious eats and treats you simply must try along the way as you go about your tour of the world. Each pavilion boasts authentic food favorites in the tradition of that respective nation, with options ranging from lighter snacks and quick service counter favorites to more lavish table service enticements. And because you have a long journey and many countries to cover we recommend trying some of these out for yourself.

15. Novelty goods from around the world

Like food, shopping around and buying novelty goods from around the world is another fun can’t-miss pursuit. This may be your only opportunity to get regional goods and specialties otherwise exclusive to the actual nation represented, with items ranging in everything from apparel to perfumes, toys to imported treats, and so much more. Another must-do detour stop along the way is to the Village Traders outpost, situated between Germany and China. At this open-air market setup you will find a wide range of handmade items from such nations as India, Australia, Africa, Spain, and possible other regions at a given time. So in conclusion, seize the opportunity to buy rare and unique finds when you have the chance.

While visiting Epcot’s World Showcase is great any time of the year, it’s even better when you make the rounds during one of the many seasonal events that take place here at various times throughout the year. Whether you come for the Epcot International Food & Wine Festival or venture over for the Epcot International Festival of Holidays, all the seasonal happenings pack their own signature magic to be enjoyed. So if you’ve been here any other time of the year, your next bucket list pursuit should be to visit Epcot’s World Showcase during a special seasonal happening to experience all new highlights and even more exclusive offerings.

Nothing puts the finishing touches on Disney Magic quite like a fantastic fireworks display in the nighttime sky. And you’ll find just that with IllumiNations: Reflections of Earth, taking place each night over the World Showcase Lagoon. In orchestrating a visual representation of humankind the whole world over, this nighttime spectacular incorporates phenomenal special effects and imagery, including light and water effects, accompanying music, and projection imagery. From the Earth’s explosive birth into life to illustrations for a hopeful future, this breathtaking nighttime highlight is another can’t-miss to take in while visiting Epcot’s diversely rich World Showcase.

Epcot Park in general presents perhaps the most diverse array of attractions and opportunities to be experienced within all of Walt Disney World Resort. And Epcot’s World Showcase is the very essence of this profuse celebration of rich, cultural diversity. The opportunity to visit multiple countries in a single day, take in culture through shopping and food, and foster a new appreciation for the world over in such an enjoyable way is just another example of the limitless magic that only Disney can do so perfectly.