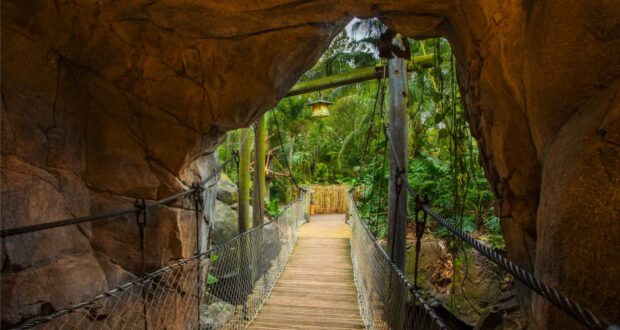 After all of the excitement built up around Walt Disney World’s 50th anniversary, it’s no surprise that the Disney Guests and Disney Cast Members have kept the festivities going in full swing even after the actual anniversary date on October 1st! If you’re at Walt Disney World for the next eighteen months, the Animal Kingdom theme park is definitely the Disney Park to frequent. Scroll down to find out the special offerings that this “wild” Kingdom has in store for you, and to learn which specials are must-sees!

There’s a wide variety of anniversary specials at the Animal Kingdom this fall, and according to the Disney Parks Blog, it includes “new experiences, celebratory anniversary sips and bites, must-have merchandise, dazzling park decorations and more”.

As most Disney Guests might have guessed, the anniversary “Beacon of Magic” in Disney’s Animal Kingdom is the Tree of Life–but even though the standout location might be a Disney Park signature, the experience you’ll get watching “as enchanted fireflies gather to call forth the magic of nature, inviting everyone to join in the celebration” and as the Tree of Life shares “its animal tales filled with whimsy and heart” is still bound to move you!

As in the Magic Kingdom, EPCOT, and Hollywood Studios, the Animal Kingdom is also host to unique  “Disney Fab 50 Character Collection” sculptures for the anniversary events. These gold figurines are placed all over the Disney Parks, and if you see one, you’re encouraged to share it online with the hashtag #DisneyWorld50!

Disney’s Cast Members haven’t stopped at decorating the Disney areas with golden sculptures; they’ve also incorporated EARidescent designs and special little touches throughout the Parks! Keep an eye out for unique decor as you’re traveling through the Animal Kingdom. You can also see plenty of EARidescent features on Disney menus; check out the Animal Kingdom’s unique 50th anniversary meals and desserts below!

At Drinkwallah, you can find an iconic version of the traditional Mickey Premium Bar. This anniversary version is “dipped in blue raspberry-flavored coating with celebration sprinkles and a little bit of pixie dust”! If you head to Restaurantosaurus, you’ll be treated to the luxuriously indulgent cheesy fries that are accompanied by “Walt’s favorite chili and cheddar sauce”. You can also get the historically-significant chili on a hot dog! For real luxury, head to the ever-esteemed Tiffins Restaurant for the delectable “50th Celebration Chocolate Gâteaux”. This dessert is just as fancy as it sounds: “almond praline, white chocolate crémeux, ganache, and chocolate-South African cream liqueur sauce” combine for an unforgettable treat that will practically melt in your mouth!

Once you’ve seen the sights and satisfied your taste buds, you’ll probably want to take some mementos home–and one of the best places to find products made just for “The World’s Most Magical Celebration”
is the Island Mercantile within the Animal Kingdom! While you’re shopping, keep your ears pricked to hear “the anthem ‘The Magic Is Calling'”, which will be part of “special live entertainment moments across Walt Disney World Resort, including performances by the Discovery Island Drummers and as the EARidescent Mickey & Friends Flotilla cruises along the Discovery River at Disney’s Animal Kingdom”. Are you heading to Disney World during its 50th anniversary? Which Park are you most excited to visit?