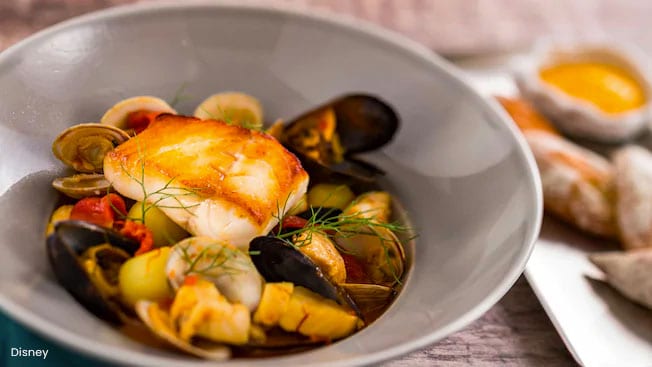 With new hotels slated to open within the next several years comes the promise of brand new dining options set to make way at Walt Disney World Resort. One of the most highly anticipated tidbits recently revealed is the announcement of an all-new Princess and the Frog-themed table service restaurant to be featured at Disney’s new Reflections Resort. The resort, which is slated to open in 2022 will be a celebration of nature in full Walt Disney style, and will even include A-Frame and treehouse-like accommodations. While details about the new restaurant are still largely unknown, including whether or not it will feature character appearances or other meal elevating experiences, what we do know is that it will afford guests lakefront (or in this case bayou-front) dining overlooking Bay Lake and feature authentic cuisine.

In other resort dining news, it has also been reported that the Cove—a new extension resort to the Walt Disney World Swan & Dolphin hotels—will feature new dining designations onsite as well. This includes a still discretely described restaurant that will reportedly seat up to 75 diners and accommodate an additional 50 at the bar and lounge areas. And while information is still underway for the Star Wars Galactic Cruiser two-day immersive “land cruise” resort, what we do know is that dining will be presented in some sort of capacity, obviously.

We already know about the Silver C Lounge, which was revealed in August. And on one last note, it has been reported that the Grand Floridian’s famed Cítricos restaurant will soon be transforming into Victoria & Albert Bistro as part of an ongoing resort-wide re-imagining initiative. We have already seen the recent transformation of Mizner’s Lounge and the adjacent Commander Porter’s men’s clothing store into the new Beauty and the Beast-themed bar—The Enchanted Rose.

We’ve been covering all these newly slated dining venues that will be premiering at various Walt Disney World Resort Hotels in the near future, but perhaps the most anticipated new designation of all is Topolino’s. Set to open at Disney’s new Riviera Resort next month, in conjunction with the resort’s own grand opening, Topolino’s is already taking reservations for what is sure to be one of Disney’s newest dining trends. Presented as a full-service rooftop signature dining venue, the design, décor, and inspiring menu will all encompass the European feel of the cliff-side restaurants of the Riviera. And the delectable and savory cuisine features here will highlight the very best of stellar Italian and French regional delights.

Evening dining will be much more than just a meal—but an entire experience, enhanced even more by the spectacular aerial views surrounding you as you dine high in the sky. You will even be at a premium vantage point to see both Hollywood Studios and Epcot during each park’s own nighttime spectacular. But dinnertime isn’t the only featured experience to delight in here. Families with children will particularly be interested to learn about the special character breakfasts to be offered during the morning hours— Breakfast à la Art with Mickey & Friends. These occasions will feature a special prix-fixe breakfast menu packed with palatable possibilities. And with a name like “Topolino”—the name Mickey Mouse goes by in Italian—you can expect to see the mouse himself onsite in the restaurant while you eat, accompanied by Minnie Mouse, Donald Duck, and Daisy Duck—all gussied up in dapper dress attire for the grand occasion.

These are just some of many dining developments currently in the works at Walt Disney World Resort. With new announcements always being made, and plenty of anticipated additions still being revealed for the 50th anniversary and beyond that time, we can expect the revelation of new food establishments to increase even more in the coming years. No other place can do such distinguished, diversified dining possibilities to appeal to each and every one of its visitors quite like Disney.

Left 3 of 3 right
Next: You’ve Decided to go to Walt Disney World… Now What?