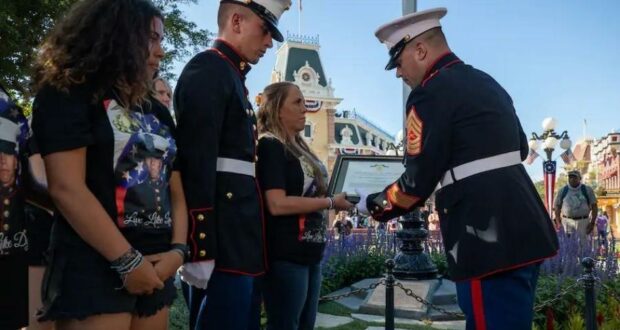 Lance Cpl. Dylan Merola of the United States Marine Corps was killed in Afghanistan during the chaotic withdrawal of U.S. troops from the capital city, Kabul. But the American hero was also an avid Disney fan. According to American Military News, Disneyland was Merola’s “happy place,” and his favorite attraction was Space Mountain. So, it was arranged for his family to receive a posthumous medal commemorating his heroic actions during Disneyland’s somber Flag Retreat Ceremony on August 8.

“After the U.S. flag was lowered, Marine Master Sgt. Patrick Hause — the Casualty Assistance Calls Officer (CACO) who assisted Merola’s family after his death — presented the Navy & Marine Corps Achievement Medal posthumously to Merola’s mother, Cheryl Rex, who attended with her children Branden Murrell, 24, and Olivia Hernandez, 14, along with her parents.“ “Receiving Dylan’s award at Disneyland was very emotional,” said Rex. “It was also calming to know that this was Dylan’s place where we spent a lot of time for Dylan’s whole life.”

The 20-year-old was one of 11 Marines who died at Kabul International Airport on August 26, most of which were from the 2nd Batallion, First Marines at Camp Pendelton.

The arrangement was made possible by Master Sgt. Hause’s wife, Monica, a veteran of the Army and Air Force, who reached out to Disneyland personnel.

The Flag Retreat Ceremony has been a daily tradition at Disneyland Park since its inception, featuring a performance by the Main Street Marching Band that includes “The Caissons Go Rolling Along,” “Anchors Away,” “The Marines’ Hymn,” “Semper Paratus,” and “The U.S. Air Force Song.” Cast Members with military backgrounds lowering the flag in the middle of Main Street, U.S.A.’s Town Square, each evening. 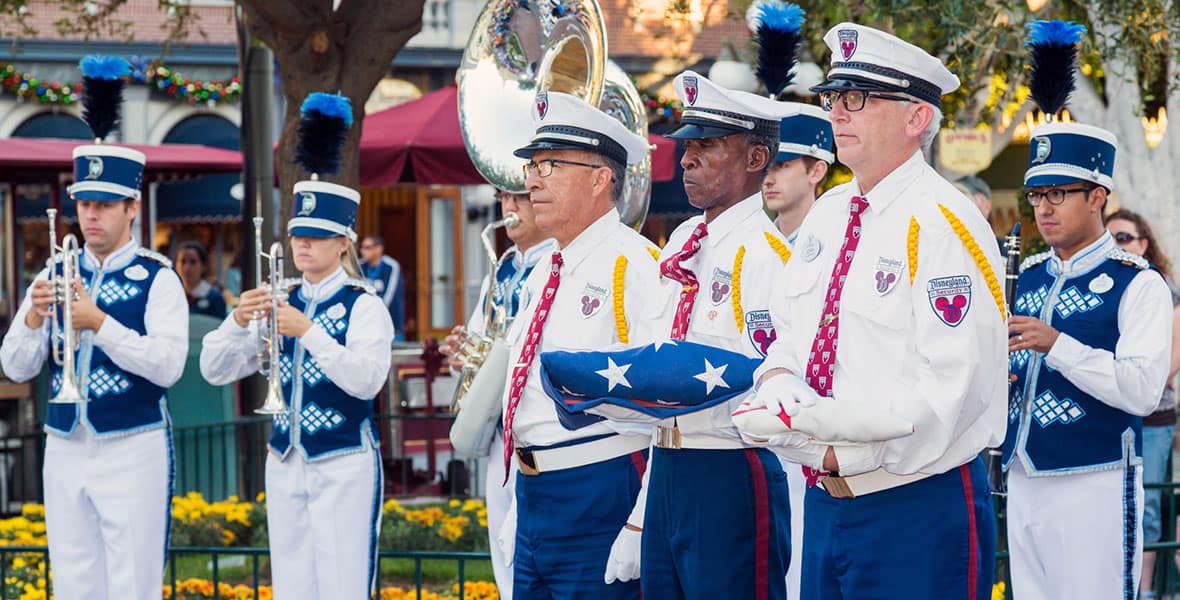 But this special ceremony began with the following announcement, according to Disney Parks Blog:

“Today’s ceremony is a special dedication to a courageous United States Marine who gave his life last August while protecting the security of others at Kabul International Airport in Afghanistan. His valor and ultimate sacrifice is recognized today with the Navy Achievement Medal. Join us as we salute his family and remember Marine Corps Lance Cpl. Dylan R. Merola.”

“We felt a strong connection to them,” said Disneyland spokeswoman Susi Brown. “This is something very out of the ordinary.”

“We had season passes here since my kids were small,” Merola’s Mother said. “It was ours and Dylan’s happy place.”

Along with the presentation, Merola’s family also received a very special day at Disneyland that included a special behind-the-scenes tour of Walt’s apartment above the fire station and front row seats to the Main Street Electrical Parade and Disney Fireworks show. Related: Guest Rides ‘Pirates of the Caribbean’ 28 Times in One Day During Special Fundraiser