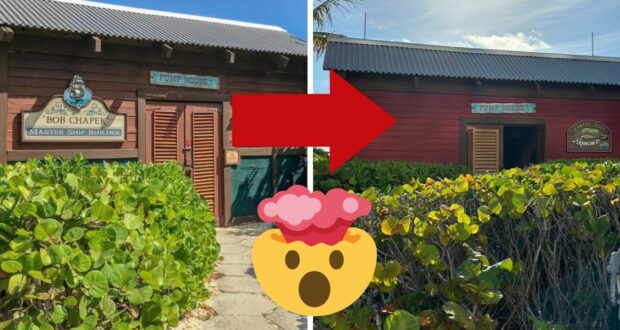 Disney fans have been all abuzz with the news of the popular old CEO’s return and the notoriously-unpopular Disney CEO Bob Chapek’s exit — and apparently, Disney is not just committing to this decisive move in general: Disney is also wasting no time in solidifying the change!

For once, Disney is actually acting quickly when it comes to refurbishing and renovating attractions or Disney establishments. We have seen a lot of complaints coming from Disney Guests in recent months that involve Walt Disney World Resort or Disneyland Resort rides in disrepair, a “ridiculous” number of Disney Park ride breakdowns, and extended ride closures for popular roller coasters like Expedition Everest: Legend of the Forbidden Mountain.

Therefore, when Disney fans noticed that a CEO Bob Chapek sign had been taken down in a matter of days, the contrast between the quick turnaround time and Disney fans’ recent complaints was almost laughable!

Journalist Scott Gustin shared a Tweet from Scott Sanders (shown below) with an image of the “Bob Chapek: Master Ship Builder” Pump House 1 sign, which adorned Pump House 1 on the private island called Castaway Cay (which belongs to Disney Cruise Line) in the Bahamas.

The photo from Sanders showed that the Chapek part of the sign had indeed been removed promptly — and another Tweet, shown further below, confirmed that the sign had been there only a few days earlier.

“This might be the fastest Disney has done anything … ever,” Gustin joked.

This might be the fastest Disney has done anything … ever. https://t.co/5HrL6LWwKQ pic.twitter.com/9j0usgjymB

Many fans discussed Chapek and Disney’s recent downfall in the comments, with some fans making jokes about Disney’s brisk removal of any evidence of Chapek going forward.

Yup – was there on Friday! ? pic.twitter.com/CZG7ISHiAA