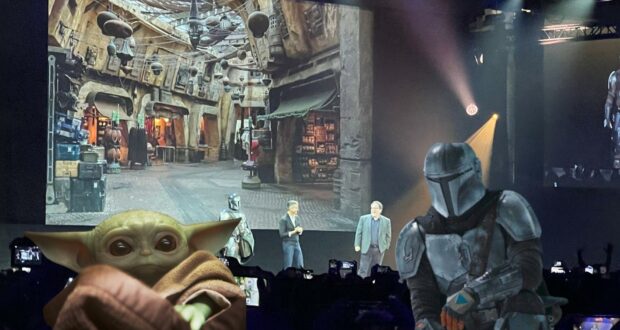 The D23 panel of  “A Boundless Future: Disney Parks, Experiences and Products” is off to an incredible start with the first look at the Mandalorian and Grogu.

D23 has been jam-packed with exciting announcements and huge surprises for fans, from an expansion to the Avengers Campus in Disneyland Resort, to the return of “Happily Ever After. The announcements have had fans incredibly excited about everything that is to come. 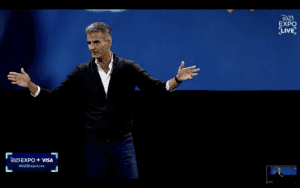 After prepping the audience with the background of how “Star Wars storytelling has exploded,” with “all kinds of new characters from that galaxy far far away” the Chairman, Disney Parks, Experiences and Products, Josh D’Amaro surprised audiences with an exciting reveal.

With a surprise appearance from Disney Legend, Jon Favreau, the pair took to the stage to announce that starting mid-November, Guests will be able to see the Mandalorian and Grogu at “Star Wars: Galaxy’s Edge” at Disneyland Resort.

In mid-November, guests will be able to see the Mandalorian and Grogu at Star Wars: Galaxy’s Edge at Disneyland Resort. #D23Expo pic.twitter.com/rOLMMpljIh

Fans are already on social media, expressing their unhappiness that Grogu and the Mandalorian are only coming to Disneyland. Check out the tweet from Star Wars fan and Twitter user, Justin Hamilton, who expressed,

“Why just Disneyland it’s not fair”

Why just Disneyland 😭 it’s not fair

This isn’t the only news we got relating to The Mandalorian from D23. We also got a trailer for season 3, and we now know the Star Wars universe is changing for good with The Mandalorian season three. The official trailer gave all fans a sneak peek at the episodic return of Bo-Katan, Grogu, and more.

The audience was also treated to news about the upcoming Ahsoka, featuring Rosario Dawson as Ahsoka Tano.

We at Disney Fanatic will continue to keep you updated on all Disney news and D23 news as it comes to light.