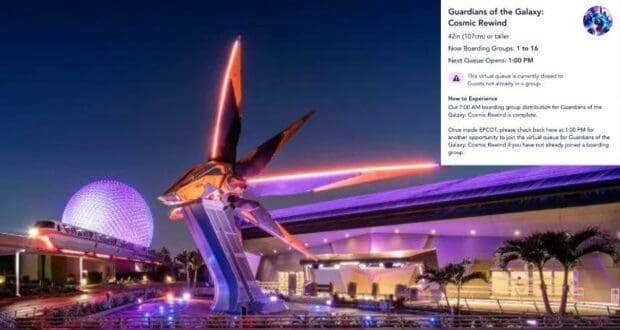 Guardians of the Galaxy: Cosmic Rewind opened to the Disney World public today, May 27, via virtual queue and Individual Lightning Lane access, and Guests completely claimed all boarding group space in the span of just a few minutes.

EPCOT’s next-generation indoor roller coaster offered two different times for Guests to join the virtual queue, 7:00 am and 1:00 pm. Boarding group space was reserved only for those Guests with an EPCOT Theme Park Reservation, and the grand opening drew max capacity crowds (at least, maximizing the limited Theme Park capacity still in place).

According to Theme Park insider Scott Gustin, it appears that not only did the virtual queue fill up within minutes after the clock struck 7, but the Lightning Lane options as well.

Gustin advises would-be Disney World Guests to keep trying to purchase Lightning Lane passes until 7:12 due to the possibility of options resurfacing due to last-minute changes and payment-related errors. We at Disney Fanatic concur with this advice.

Something to keep in mind if you’re trying for Cosmic Rewind Individual Lightning Lane this weekend: If you fail at 7 am, keep trying until at least 7:12 am.

7:12 am is the purchase timeout for people who changed their mind or received an error during checkout. https://t.co/9uIAexHwdO pic.twitter.com/HbCRKJeQoB

Read More: Heading to ‘Guardians of the Galaxy: Cosmic Rewind’? Here’s What to Know Before You Go

Once the dust settled a few minutes later, the countdown began for the second opportunity to join a Cosmic Rewind boarding group at 1:00 pm. But, according to Gustin, that second batch of spots lasted just over a minute.

He said, “The Guardians of the Galaxy: Cosmic Rewind 1 p.m. virtual queue drop lasted about a minute. The highest boarding group number I have seen (so far) is 218. That group should be called around 8 p.m.”

The Guardians of the Galaxy: Cosmic Rewind 1 p.m. virtual queue drop lasted about a minute.

The highest boarding group number I have seen (so far) is 218. That group should be called around 8 p.m. @disneyziggy @ThrillData pic.twitter.com/g8VWCCqN7x

In the near future, there will be a third opportunity to join Cosmic Rewind’s virtual queue at 6:00 pm, but this will be reserved exclusively for Walt Disney World Resort Hotel Guests during nights with extra Park hours, and those Guests’ eligibility will not be determined by Theme Park Reservation.

Virtual queues have no impact on ILL.

When the 6pm is offered to resort guests on nights with extra hours, anyone with park reservation or hopping and staying at a qualifying resort hotel can join. The 7am/1pm does not impact eligibility.

Guardians of the Galaxy: Cosmic Rewind is the latest completed addition to EPCOT’s ongoing overhaul, and has received stellar reviews throughout the past few weeks.