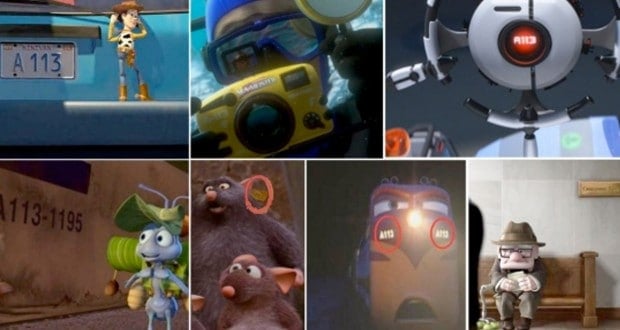 Exploring facts about all things Disney leads to intriguing discoveries. Disney Fanatics are kin to FBI agents on the trail of secrets yet to be discovered. Club 33, Hidden Mickeys, Disney alerts and codes are only a few of the fan finds. Now there is the secret “A113” to add to their ever growing list.

Animators who attended California Institute of the Arts would insert the term “A113” into their artwork as kind of an insider secret. The frequency with which “A113” was discretely used in more and more films over time, Disney Fanatics began to sit up and take notice ferreting out this hidden message in a variety of Disney films.

Director Brad Bird (The Incredibles, Ratatouille) was the first to use “A113” as an Easter Egg (hidden message); he put it on a car license plate in Family Dog, an animated segment from the 1987 TV series Amazing Stories.

Pixar’s co-founder John Lassiter has explained A113, pronounced A1-13, is the number of the animation classroom at the California Institute of the Arts. Mystery solved! Many acclaimed animators including Brad Bird, Pete Docter, Andrew Stanton and John Lasseter attended school at Cal Arts and have risen to prominence in the field of animation. By including the “A113” in their films as Easter Eggs, they are giving a subtle shout out to their alma mater and a tip-of-the-hat to classmates.

Easter Eggs are considered an inside joke among animators. Many WDW Imagineers hail from Cal Arts, and by hiding “A113” somewhere in a film, they give a secret nod to the place that gave them their start and where they sharpened their artistic skills of high stakes imagining. So the next time you are watching a film and you spot “A113”, you will know that an alumnus of Cal Arts worked on it and is continuing the inside joke.

Here’s a list of places where the “A113” code has been spotted in Disney films.

14. Also in Cars, an airport announcement for “LassetAir Flight A113” (also a reference to director John Lasseter).

12. Finding Nemo – Model number of the camera used by the scuba diver.

11. The Incredibles – Room number in Syndrome’s lair (not seen, mentioned by Mirage). The prison level where Mr. Incredible is held is “Level A1” in Cell #13. The power level control room monitors “Level A1” section “13”, where the rocket is.

10. The number on Trev Diesel, the freight train that Lightning McQueen outruns while he is first on his way to Radiator Springs.

9. Trev Diesel was also made as a carrying case for the die-cast line and has A113 on it.

8. A113 is Mater’s license plate number in the related short film, Mater and the Ghostlight, Cars Toons, and other Cars merchandise.

6. The number on Siddeley’s tail (shown as A113), as well as on Mater’s license plate again. On the tail of the plane in the airfield that Mater and McMissle escape on.

4. WALL-E – The code for the directive given to the Axiom’s autopilot to never return to Earth, the first (and currently, only) time A113 had any real significance to a Pixar film’s plot. It also seems to spell out part of WALL-E’s name, wA11-3 (partial Leet). Also, when Eve and WALL-E arrive on the Axiom, as they leave the docking bay, the doors are marked Deck A-224 – 1 added to each digit of the reference.

3. Up – The number of the court room that Carl Fredricksen goes to after he hits a worker to protect his mailbox.

2. Brave – written in Roman numerals (ACXIII) above the interior of the door to the witch’s cottage.

1. Monsters University – The lecture hall where Mike and Sulley have their first class has this number on the door.

Keep your spy glasses out while watching Disney films and find the sneaky secrets! Just to warn you,“A113” has even been spotted in some live-action films, including The Avengers, Mission: Impossible, and Hunger Games: Catching Fire. Obviously a Cal Arts graduate strikes again! Where else have you seen “A113”? Share your discoveries in the comments below:

– Disney Cast Member Secret Codes – What Are They And What Do They Mean?