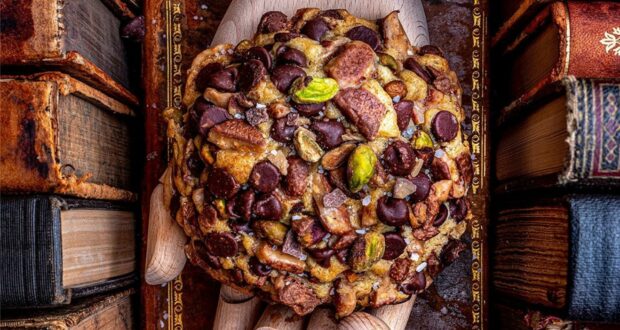 Here’s Why Gideon’s Bakehouse at Disney Springs Is Irresistible

It can be said that while the attractions found within the four parks at Walt Disney World Resort are most notably centered around rides and interactive experiences, the attractions that fuel the scene at Disney Springs are focused more on shopping, dining, and stage entertainment. In regards to the second matter, Disney Springs reigns supreme with an abundance of diverse tastes and options in everything, from fanciful table service establishments to convenient quick stop options. And one such consideration for impeccable, one-of-a-kind exclusive cookies and cakes is Gideon’s Bakehouse. With its pleasantly peculiar Victorian/Gothic curiosities motif, quaint charm, small staff of devoted employees, and novel cookie concoctions made from scratch, there are endless reasons for why Gideon’s Bakehouse at Disney Springs is so irresistible. Here are just a few.

Gideon’s Bakehouse in Disney Springs softly opened to the public in late 2020, just before Christmas, for a limited time. Officially celebrating its grand opening later on January 16, 2021, Gideon’s has remained opened ever since, earning a reputation as the ultimate Disney-going cookie lover’s wildest dreams come true. But that’s not where the story begins. Back in October 2016, visionary founder and creator Steve Lewis humbly opened his first bakery of homemade novelty cookie concoctions at East End Market in Orlando, Florida with just one other employee and a modest budget of $800. While the original location still serves as the first primary basis for the Gideon’s Bakehouse brand, the new anchor shop location at Disney Springs is already an undeniable crowd-pleaser.

2. The Story Behind the Theme

Many may wonder how the name “Gideon” came about. Well, it’s a pretty interesting story, actually. When Steve Lewis was searching for culinary inspirations for his new bakery, he purchased what he assumed was just an old antique cookbook from 1898. What he found scribbled along the margins and pages throughout, however, were countless doodles and notes from what appeared to be the handiwork of child with big dreams of becoming baker. The name he found written at the back of the book read “Gideon.” So on a creative whim, Lewis decided to fulfill the vision of who he conceptualized Gideon to be—a young boy living during the Victorian era—by naming his bakery for him.  Additionally, Lewis established a Victorian/Gothic motif about the place through décor and other nice touches, including classy (and slightly eerie) wall art, shelves filled with aging books, relics, and other curiosities. Inspiration for the finalized design and décor were influenced by the works of artist Edward Gorey as well as by Disney’s own Haunted Mansion attraction.

In just a few short years, Gideon’s has earned a stellar reputation that any bakery would be proud of. In addition to garnering local praise and recognition on the statewide level, they’ve also celebrated acclaim both nationally and internationally through a multitude of awards and honors. They’ve been credited time and again for offering the “best” and/or for being the “best” through countless publications, and accolades, including Orlando Sentinel, Orlando Weekly, Visit Orlando, The Boston Globe, Insider Magazine, New York Times, Business Insider, USA Today, Business Journal, Sports Illustrated, Appetit Magazine, Delish.com, Travel Advisor, ZAGAT, and several others. They even appeared on HGTV’s House Hunters and on Food Network Brazil.

While having international praise and recognition is fulfilling on several accounts, Gideon’s claim to fame in the cookie field is perhaps the most motivational driving force of all behind their production. In short, they are known far and wide for their made-from scratch nearly half-pound cookies, all baked in small-batch format. This explains the carefully cultivated detail in taste, flavor, and precision that goes into every morsel they roll out. And while good old classic chocolate chip is still the ultimate flavor of choice, Gideon’s has been known to get creative by offering a broad range of novel spins and variations, some of which include: Pistachio Toffee Chocolate Chip, Orange Pecan Chocolate Chip, Peanut Butter Crunch, Cookies & Cream, Triple Chocolate Chip, Gideon’s Bites (mix and match quartered cookies containing candies and other bits and pieces toppings), and the Coffee Cake Cookie, which is exclusive only to Disney Springs. Also take note that there are limited-time and seasonal options that come and go on the menu as well.

While cookies may be their official claim to fame, Gideon’s is also renowned for many other menu offerings as well. Their enticing array of three-layer cakes, served by the slice, range in multiple variations and flavors, with their True Red Velvet standing out as an uncontested favorite—a confection that beats out convention. Their Double Frosted Cakes are a Disney Springs exclusive, unmatched in comparison to any other buttercream-filled dessert cake anywhere else. Then there are those decadent featured Daily Chocolate Cake Slices, which alternate each day to bring you something new and delightfully chocolaty. One of the most unique items to explore here, however, isn’t even listed on the menu. It’s their highly guarded Secret Slice offer—a random release special that is so hush-hush you have to keep an eye out for posts of social media to know what the next one will be, along with the equally mum password you must provide once at Gideon’s in order to share in a piece. Do take note that there is a one per customer limit. Pair your cookies with a nice cup of locally produced old-fashioned milk or enjoy a nitro brew on tap at Gideon’s as well. But if milk or coffee isn’t your thing, they also proudly serve up Blue Sky 100 percent cane sugar soda in a wide range of available flavors.

So we covered cookies, cakes, and beverages, but what other offerings will you find on location at Gideon’s Bakehouse? Well, there’s the merchandise for one thing. Gideon’s sells fan-favorite clothing items like shirts, artwork, prints, pins, and a whole lot more. And if you think the bakery smells delicious consider bringing some of the scent home with their Coffee Cake Cookie Candle, inspired by their Disney Springs exclusive.

If you’re a fan of freshly baked, just-out-of-the-oven, warm and glooey cookies, then it’s time to rejoice! Every evening Gideon’s hosts a special “Hot Cookie Hour” from 7 p.m. to 8p.m. as the perfect after-work pick-me-up or after-dinner dessert outing. While the usual in-bakery purchases here are of cookies made earlier in the day and already cooled to perfection, Gideon’s Hot Cookie Hour features their famous Chocolate Chip classic cookies, fresh and just out-of-the-oven, and served up along with some of Kelly’s Homemade Ice Cream—another local Florida classic. It’s an experience you won’t want to miss!

Gideon’s Bakehouse opens its doors to the public everyday at 10 a.m. But that’s not to say that the line outside the door doesn’t start forming much earlier than that! In fact, most eager fans begin the shuffle as early as 9 a.m.! But with Gideon’s you should take note—it’s a first come, first served operation, and the earlier you arrive the better. In fact, the cookies and cakes featured at Gideon’s Bakehouse take a full 24 hours to prepare, as everything is made entirely from scratch and with such precision. That’s a tall order, and it’s understandable why there are limitations in supply; perfection isn’t something that can be mass-produced. But latecomers do note that Gideon’s at Disney Springs is open until 10 p.m. Sunday through Thursday and as late as 11 p.m. on Fridays and Saturdays. However, we’d like reiterate that it’s the early bird that gets the worm, or in this case, the cookies!

In a way visiting Gideon’s Bakehouse is a lot like entering a Disney Park attraction. They even have a food equivalent of Disney’s famed FastPass+ system, so to speak. It’s their Virtual Queue—a way of assuring entry by reserving a return time for visitors when crowd traffic starts to pick up. Depending on the time of day and the amount of people at a given time, the Virtual Queue option may be implemented anywhere between opening and early lunchtime on most weekdays and sometimes even before the doors open on weekends. Signing up for the Virtual Queue must be done in person. You will find staff on standby next to the bridge in front of the Morimoto Asia restaurant. Once you are in the queue you are free to go explore Disney Springs while you wait for a text, notifying you of your return time. When you do receive your text, you will enter a separate return line (the Virtual Queue line), which roughly averages a 15-minute wait as opposed to a seemingly unending line at the door. Do note, however, that even when signing up with the Virtual Queue, the time slot before your return may range anywhere from two to five hours, so again, the earlier you arrive the better! Also, that the Virtual Queue normally ceases operations around 6 p.m. and 7p.m. nightly, in order to tend to those still waiting patiently in the non-queue line before closing time.

Gideon’s Bakehouse has thought of everything! They even established important rules and policies to help ensure smooth operations and prevent the potential for any overwhelming concerns or in-bakery burdens. These policies are crucial in carrying out operations and have been found to be mutually beneficial for both staff members and patrons alike. The first item guests should realize is the fact that there is a six-cookie per person limit in the store. But since Gideon’s famous cookies typically average close to half a pound that’s close to three pounds of cookies a person! Also keep in mind that Gideon’s Disney Springs location does not take preorders for cookies. The original location at East End Market can accommodate you in your need for advance preorder pickups, however. Another thing you should be aware of is the fact that Gideon’s does not ship any of their baked goods. They are an exclusive Orlando-based operation that proudly produces products 100 percent from scratch. Due to quality control issues and the burden that comes with shipping costs, they forego such fanfare altogether. Gideon’s goods are made and served entirely how they are intended to be—fresh and onsite. Those with allergies and dietary needs also take note, due to Gideon’s original recipes and content, modifications and customizations are regrettably not possible, and products here are neither vegan nor gluten free. They stay true to the original process and cut no corners in the preparation and execution of their finalized products.

When first established, Gideon’s Bakehouse had one humble goal—to create an extraordinary chocolate chip cookie. And they’ve done well for themselves in both achieving that goal and far exceeding it beyond anything they could have ever imagined. What once began in a home kitchen has emerged into a time and taste-tested enduring history they invite all guests to come and sink their teeth into!