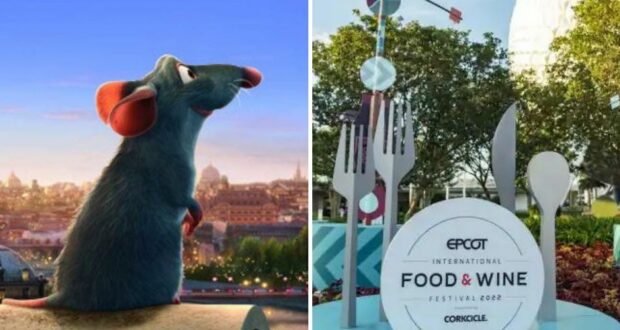 When the France Pavilion in the World Showcase (one of the highlights of the Disney Park EPCOT) was updated with new restaurants, locations, and the Genie+ ride Remy’s Ratatouille Adventure, it brought new attention to the 2007 heartwarming animated tale Ratatouille. Now, Remy the rat and his culinary-loving friends are getting some extra attention again in the form of a special EPCOT International Food & Wine Festival scavenger hunt!

Disney rarely fails to impress when it comes to naming attractions, and Remy’s Ratatouille Hide & Squeak scavenger hunt is no exception. Disney Guests will immediately recognize the scavenger hunt’s cute pun, which is a reference to the Ratatouille story’s focus on Remy the rat and his rodent adventures in Paris as he trains to become a chef. According to the Disney Parks Blog, you can begin this scavenger hunt within EPCOT at one of three special EPCOT International Food & Wine Festival spots: Port of Entry, the Creations Shop, or World Traveler at International Gateway.

Once you’ve arrived at one of the three locations to begin the adventure, you can purchase the necessary map and stickers and head into EPCOT’s World Showcase (which will be decked out in Festival finery with plenty of delicious foods to sample in honor of the popular EPCOT Festival that has just begun).

In the countries of the World Showcase, several Remy statues have been hidden. Every time you and your fellow Disney Guests locate a Remy statue, you can mark the statue location on your map with the relevant sticker and continue on your quest! This scavenger hunt might sound simple, but some of the statues may be harder to find than others. After you’ve found all of the hidden Remy rodents, head to either Disney Traders or World Traveler at International Gateway to receive a unique Ratatouille and EPCOT Festival souvenir! This scavenger hunt is part of the EPCOT International Food & Wine Festival, so it should last as long as the Festival lasts (i.e. November 19). However, once all of the maps and stickers have been taken, you’ll be out of luck — so if you’re a Disney Guest who loves Remy (and wants to explore the cuisine being offered in the World Showcase as you search for Remy statues), then you’ll want to embark on this adventure sooner rather than later!

Will you be heading to EPCOT this summer and fall to participate in Remy’s Ratatouille Hide & Squeak scavenger hunt, or just to eat delicious fare from all over the world?