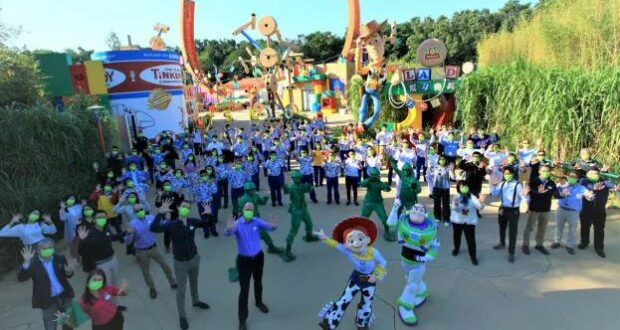 Hong Kong Disneyland Cast Members, including some who have worked at Toy Story Land for all 10 years, shared their excitement over the anniversary in their messages above and by creating their own celebrations around the park. Much like the Class of ’71 Cast Members who have been featured by Disney while celebrating the 50th anniversary of the Walt Disney World Resort, we loved hearing from the Cast Members in this interview who have spent all 10 years of Toy Story Land working in this area of the park.

These opening day Cast Members have been responsible not only for creating magic and happiness for Guests visiting the park from all over the world, but they have also created some memorable traditions for other Cast Member to follow. On top of that, they are understandably experts on the classic Pixar film, and they get a kick out of stumping Guests with difficult trivia questions and helping them learn more about the Toy Story films. Toy Story Land was a monumental achievement for Hong Kong Disneyland since it represents the first ever themed land expansion in the history of the park. While we now have numerous land expansions stateside, like Cars Land at Disney California Adventure, Star Wars: Galaxy’s Edge at Disneyland and Disney’s Hollywood Studios, and of course Toy Story Land at Disney’s Hollywood Studios, this one at Hong Kong Disneyland was the first for this park. We loved seeing all of these photos of Cast Members celebrating the 10th anniversary. Check out this talented team of custodial Cast Members with their chalk art!