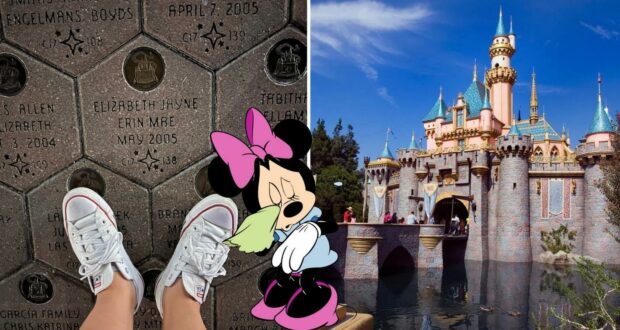 The Disney Parks are places of magic and wonder, but sometimes, Guests can behave in ways that are less than acceptable.

Being an active part of the Disney Park experience is something any Guest would love. Disney fans love to find ways to make their Disney visit special, and Cast Members often go above and beyond to do the same for fans. One of the ways that Disneyland Resort used to let Guests feel a part of the Theme Park, and become a permanent part of it, was by buying an engraved brick that was celebrating Disneyland Park’s 50th Anniversary.

Among these fans who have their brick in Disneyland Resort is current Disney influencer Liz (@chimchimchurro). Her family purchased one, engraved with their names, and the year 2005. And now, it’s been defaced.

Liz took to TikTok to share the photo, and it’s honestly quite sad.

In the video, Liz shares the capture of the brick and details that “somebody stole the medallion out of [her] brick in Disneyland.”

She said, “I don’t even want to post this video because I don’t want to give the person that did this the satisfaction of knowing how upset I am,” Liz said. “I’m so sad. Why would you do that? That’s so mean.”

Just a few days ago, on September 17, Liz shared a memory of visiting the brick with Chairman, Disney Parks, Experiences, and Products Josh D’Amaro, on the social media platform Twitter. The caption read,

One year ago today Josh visited my brick with me and we took a pic of our Disney shoes together.

One year ago today Josh visited my brick with me and we took a pic of our Disney shoes together. pic.twitter.com/5dnPYq4Uw8

Liz reported the defacing of her brick the next day, September 18.

While the situation is heart breaking, people were quite kind in the comments, some even asking about replacing the medallion again, to which Liz responded, “I appreciate everyone’s kind words! They no longer make these so it can’t be replaced but your thoughtfulness means a lot. 🤍🤍”

My friend visited last night and it was there. So it happened today. I feel like I’m going to throw up.

I get mean comments all the time that say they’re going to steal it but I hoped no one actually would. 😭😭😭

My friend visited last night and it was there. So it happened today. I feel like I'm going to throw up. pic.twitter.com/MOxvj2jCTg

While Disney fans have tried to be helpful with suggestions of asking to review security footage, informing Liz that while the timing is highly suspect, it’s possible that the glue came loose when the Disney Park is power washed each night.

Regardless, if, in fact this was done by a Guest, the behavior is one in a long list of recent incidents of bad and unacceptable behavior. The Disney Parks are special places where Guests go to live a fantastical Disney experience, and ruining that for others is, as Liz put it, nothing short of mean.