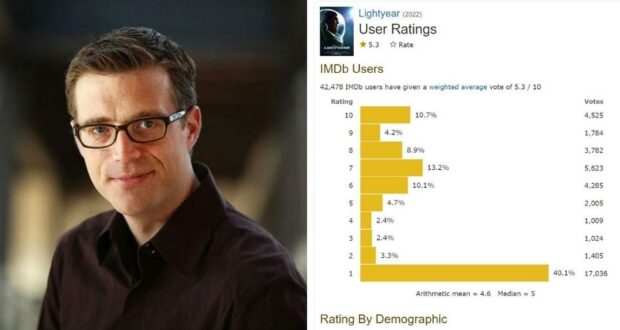 As Disney/Pixar’s Lightyear continues its theatrical run, it continues to hold the unfortunate dissonance of simultaneously holding decently high ratings and downtrodden ticket sales. It seems that the Lightyear director Angus MacLane has broken his silence on the matter over the past week.

Beginning on July 1, he said,

MacLane’s twitter feed before and after this tweet is filled with retweets of fans praising the film for what it is. But over on platforms like IMDb, fans are not so gracious. When asked about that, the director appears to bitterly discredit the voices there, saying that his movie’s rating problems are “much like the second chapter of THE HOBBIT, it mainly has to do with trolls.”

Short answer: much like the second chapter of THE HOBBIT, it mainly has to do with trolls https://t.co/EUZrxRUUzf

According to IMDb, then, there are over 42,000 “trolls,” with over 40% of that horde giving the film a 1/10 rating. But while they are overall low, giving Lightyear a weighted average vote of 5.3/10, the age demographics make sense in that the 18-29 and 30-44 age groups–the kids who grew up closes to Buzz Lightyear and the Toy Story franchise–rated the film highest. 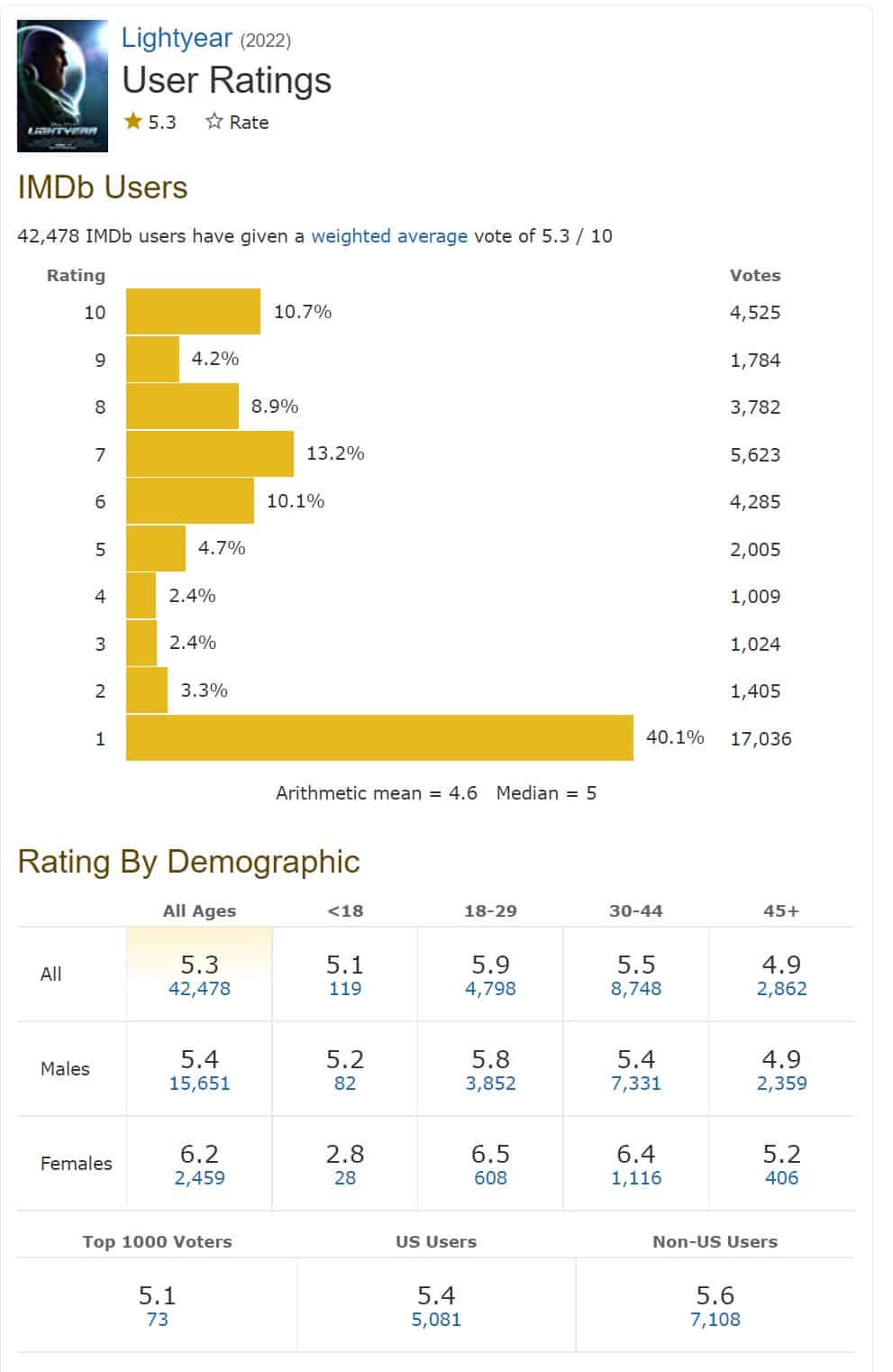 The argument continues to be that a “closed-minded” preemptive rejection of the film due to MacLane’s and Pixar’s decision to inject LGBTQ+ content and other “woke” politics into the story is what is causing the ratings to be so low on IMDb and box office numbers down. After all, Disney’s refusal to edit the “controversial content” for “less open” foreign markets, like the nations of the Muslim World, as they have done in the past, resulted in the animated flick being banned in 14 nations. And, for most of this year, the frustration towards Disney’s “politics” alluding to cancellations of Disney+ subscriptions and Annual Passes had been measurable only in social media posts and comments, making Lightyear’s box office numbers the first time that fans’ actions are possibly speaking just as loud as their words.

MacLane addressed this issue on Twitter, essentially telling moviegoers to be grateful that they got another big-budget science fiction movie.

“I don’t get it, but whatever. Folks seem pretty steamed about the film. We only get 1-2 big science fiction movies a year. The supply is too low to get too upset about them. Life is too short.”

I don’t get it, but whatever. Folks seem pretty steamed about the film. We only get 1-2 big science fiction movies a year. The supply is too low to get too upset about them. Life is too short

Regardless of who or what this Pixar director blames for the floundering of his sophomore showing on the silver screen for Pixar (he also directed Finding Dory), the fact remains that he made a film that received a 75% critic rating and an 85% “verified” audience rating on Rotten Tomatoes, immense vocal praise on Twitter, yet still has not broken $110 million at the domestic box office with a -64% difference between its first and second week in theaters. It also got comparatively steamrolled by Illumination’s Minions: The Rise of Gru. 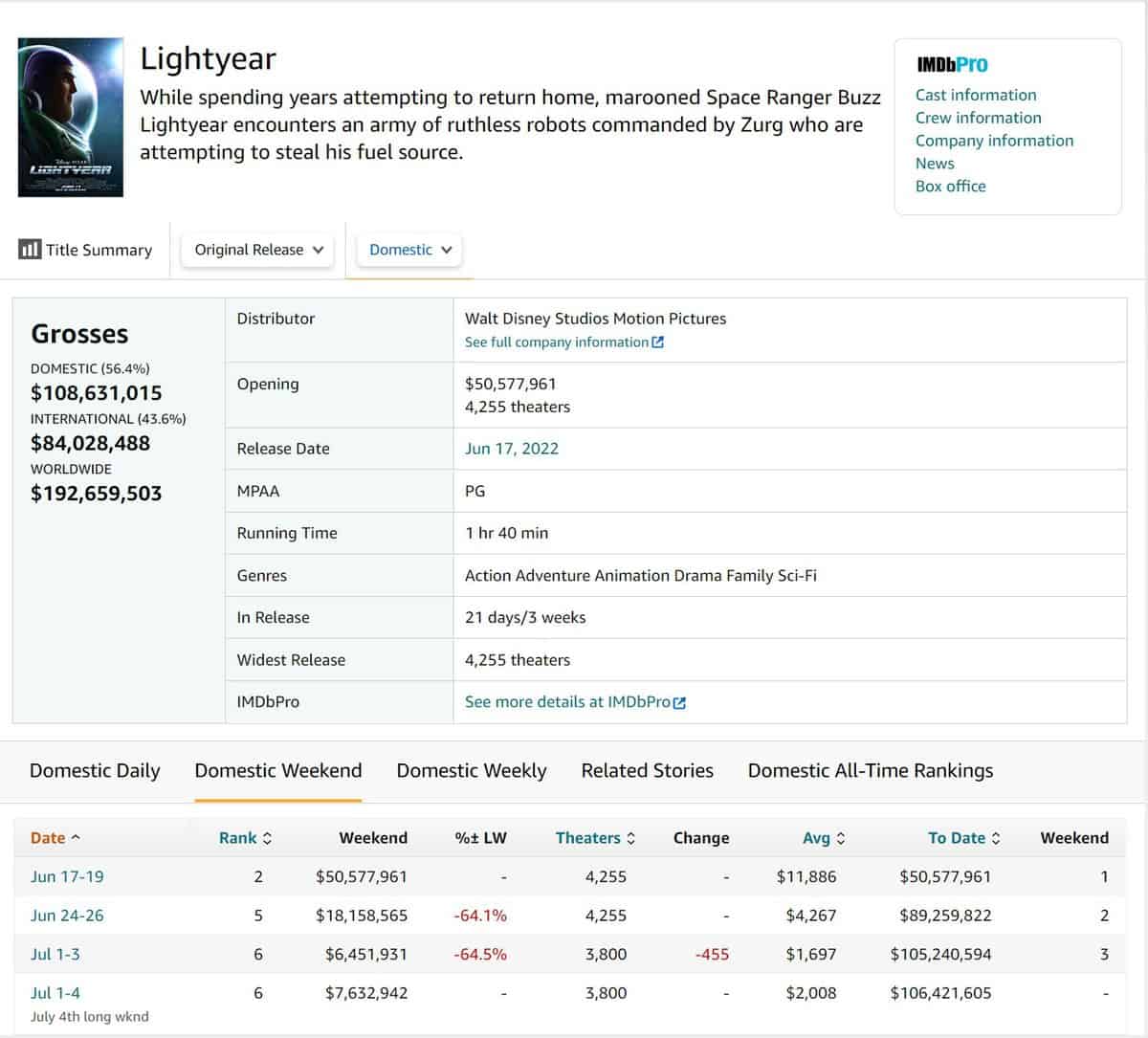 Whether or not politics played a role, something is seriously wrong in Emeryville. We at Disney Fanatic will go review the film and post our own review by the end of this weekend.

We at Disney Fanatic will also continue to update our readers on all other Disney Movie news and stories as more developments come to light.