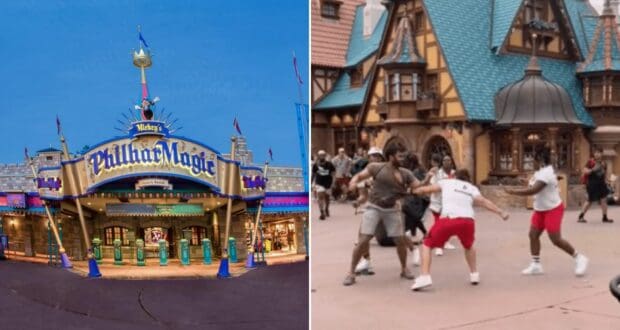 On the evening of July 20, 2022, we reported a massive fight that broke out in the Fantasyland portion of Magic Kingdom Park at Walt Disney World Resort. Now, additional details have emerged from an eyewitness bystander that spoke with a reporter at Disney Dining.

The fight involved two separate families. With no names, the families can be noted as the “Green Shirt” and “White Shirt Family”. Unfortunately, the incident reportedly occurred due to a line cutting incident at Mickey’s PhilharMagic.

Mickey’s PhilharMagic rarely holds a long wait and is a theater-style 3D film attraction that features Donald Duck and Sorcerer Mickey, among many other Disney characters.

Apparently, the sister of the man in the Green Shirt forgot she left her phone in her ECV and left the Mickey’s PhilharMagic standby line to go retrieve it. When she returned to get back in her place in line, the White Shirt Family did not want to let her back through, at which point they pushed her.

The sister of the Green Shirt man was able to make it back to her brother and watched they 12-minute Mickey’s PhilharMagic show.

The White Shirt Family was waiting for the Green Shirt man and his sister to exit the attraction just outside of Mickey’s PhilharMagic gift shop exit, called Fantasy Faire.

Foul language was shouted among the punches being thrown. The White Shirt Family reportedly called the Green Shirt man and his sister “terrorists.”

In the video someone shouts, “Where’s security?” According to this eyewitness, several Guests and Cast Members attempted to break up the fight with security arriving in about 6 minutes at the fight location, along with Sheriff and EMS at the scene.

The man with the Green Shirt left with EMS as he reportedly had a “good slash” on his chin and cheek area. The eyewitness added that the incident was “very traumatic” and that “you just never know these days.”

If you missed the fight video, here it is again, unfolding in the heart of Magic Kingdom Park:

No further details were shared on arrests or removal from the Disney Park. As reported by Disney Dining, there are no arrests currently listed for Orange County for Wednesday, July 20, 2022, that match the descriptions of the White Shirt Family or the Green Shirt man.