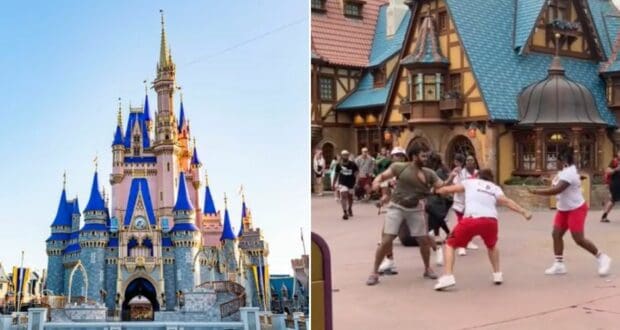 We are receiving word that this evening, July 20, 2022, a large fight has broken out at Walt Disney World Resort.

Magic Kingdom Park is a place for magic… not for fighting. But unfortunately, a video has surfaced of an incident that seems to involve several people in the Fantasyland portion of the Disney Park, which reportedly unfolded around 7:15 pm.

The fight looks like it took place between the gift shop for Mickey’s PhilharMagic and Peter Pan’s Flight attraction involving two groups of people.

There is a video taken of the incident as posted in an Annual Passholder group on Facebook that was reshared via Twitter below:

The family videoing the incident is likely dining at the quick-service restaurant Pinocchio Village Haus. In the video, the question arises, “Where’s security?” Other notes on the video include #kidsintears and #disneybrawl.

@straightstunner took to TikTok to share another video of the fight, but the video was quickly removed from social media. InsideTheMagic, however, captured screenshots of the video as follows:

Unfortunately, this isn’t the first and likely won’t be the last of these “Disney brawls.” We’ve seen other fights unfold at Magic Kingdom Park, at Disney’s Hollywood Studios in Toy Story Land, and even at the reopening of nighttime spectaculars at Disneyland Resort.

It seems like the heat and exhaustion play into the elements, and grown adults that should know better react with physical fighting out of anger. Sadly, this ruins the magic for the young children (and adults) trying to enjoy their Disney vacation.

We have an UPDATED STORY as new details have emerged from an eyewitness with insight into why the fight occurred and who was involved.