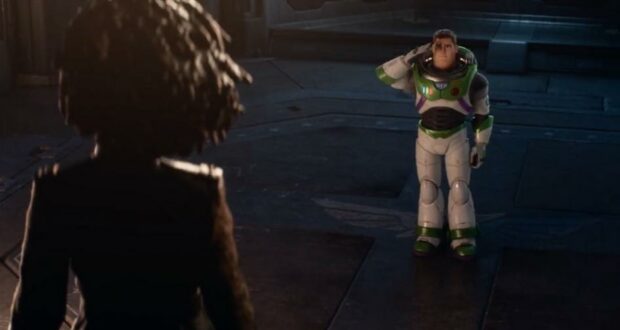 On April 21, Disney and Pixar released the latest trailer for its highly-anticipated animated feature film Lightyear, and with it, a major plot point was shared that gives the movie a much darker and sadder undertone.

Pitched as the origin story for one of Pixar Animation Studios’ most iconic characters, Lightyear tells the story of the legendary Space Ranger that inspired the Toy Story action figure that was voiced by Tim Allen and “crash landed” in Andy’s room almost 30 years ago. Previous trailers showed Buzz (now voiced by Captain America‘s Chris Evans) and a band of humans marooned on an alien world trying to get home and having to come face to face with the Evil Emperor Zurg. But the latest trailer gives a much darker revelation.

Buzz Lightyear gets lost in space AND time.

The latest 2:30 clip shows that Buzz’s 4-minute hyperspace test flight takes him over 62 years into the future. Almost everyone he knew was gone, and he had to team up with his friend’s granddaughter–now his age.

You know his name, now discover his story.

On June 17, see Disney and @Pixar's #Lightyear, only in theaters. pic.twitter.com/s1S83Xleaw

But fans will be happy to see that more classic Buzz tropes and lines have made their way into the movie, from his first lines on-screen to jokes about his strict mission log narration.

It is unclear if Buzz’s ultimate mission is to get back to his own time or if Pixar storytellers will have the Space Ranger accept his fate and put all focus on helping the remaining earthlings defeat Zurg and get back home.

Lightyear received some tumultuous press coverage recently, as it was announced that a certain contingent of creatives got the Mouse House to keep LGBTQ+ content in the story, including what is to be the first lesbian kiss in a Pixar film. But this new trailer reminds fans that they are in for a movie that goes far beyond any potential one-off scenes.

Disney/Pixar’s Lightyear is set to debut exclusively in theaters on June 17, 2022.

We at Disney Fanatic will continue to update our readers on more Disney movie news as it comes to light.