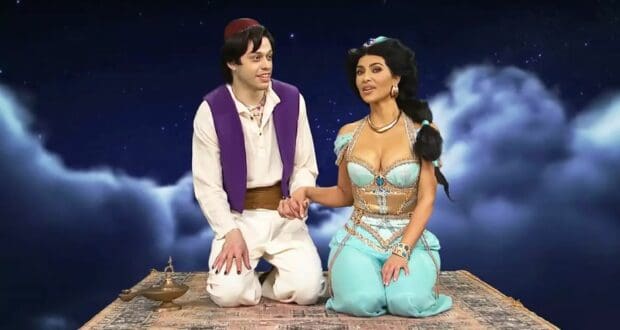 Pete Davidson Gets a New Disney Tattoo for Kim Kardashian

During the SNL sketch (not an appropriate skit for children), Kardashian (Princess Jasmine) and Davidson (Aladdin) were granted a special wish by the Genie. Kardashian and Davidson shared a kiss while on their magic carpet which some say sparked the romance.

Now, it looks like Davidson has taken his dedication to Kardashian one step further with a “Jasmine and Aladdin” new tattoo.

On Monday, July 11, Kardashian shared a recent post on Instagram of her and Davidson. Davidson has plenty of body art, but according to Insider, the small “Jasmine and Aladdin” print on his right shoulder is new as shown in the first photo below:

This isn’t the first time the Kardashians have made Disney news. In April 2022, the Kardashians visited Disneyland Resort to celebrate a family birthday. While the Kardashians are known for their reality TV shows and scandals, they were quickly noted as having photoshopped images at the Disney Park.

Furthermore, according to Insider, this isn’t the first time Davidson has gotten tattoo ink for a partner but has since covered past relationship tattoos. Now, Davidson has “Jasmine and Aladdin” along with another “Kim” tattoo.

While we appreciate Davidson’s new ink dedication to his girlfriend Kim Kardashian, we can’t help but as Disney fans focus on the animated version of Aladdin and Jasmine from the Disney classic film, Aladdin, as the true Disney couple.