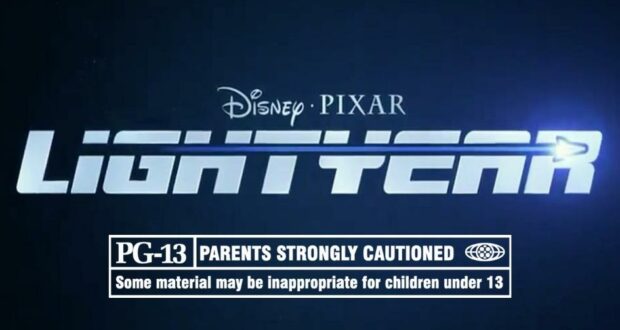 I understand that I am not the first person to write about this. But the more I think about it, the more I am starting to become convinced that this summer could see Pixar Animation Studios’s first PG-13 animated movie hit the silver screen, and here’s why:

1. The Level of Perilous Action

From the trailers alone, we can tell that Lightyear is going to be action-packed from beginning to end with scores of perilous moments. Also, despite the comedic side characters, the film looks to have some scary elements. Zurg looks scary.

While Pixar’s other action-focused movies like The Incredibles stayed at a PG rating, the latest trailer appears to suggest fans will be taken beyond those levels of action and peril.

With all of the controversy surrounding LGBTQ+ content being infused into new Disney movies, it would not surprise me if it was enough to help push Lightyear into a PG-13 rating. While animated stories tend to get rated lower, Pixar’s insistence on LGBTQ+ would suggest that content considered more appropriate for older ages will be included. Also, a significant number of parents were furious about the latest feature Turning Red, only getting a PG rating which could mean a more hard-nosed rating approach for Lightyear.

Pixar has been making feature-length movies for almost 30 years and has completely avoided the PG-13 rating. However, as I shared earlier, Disney as a whole has been working on perfecting what I call the “Family-Friendly PG-13 Genre” where the levels of action and some suggestive elements push the story far beyond the PG rating but dialogue remains friendly enough that it does not get branded R-rated.

I think that Turning Red was a turning point in Pixar animation, showing that they are getting bolder in their storytelling. So, it would not surprise me in the least if Lightyear became Pixar’s own first attempt at the “Family-Friendly PG-13 movie.”

Here’s the latest trailer so you all can decide for yourselves:

But at this time, it should be stated that there is no rating yet for Disney/Pixar’s Lightyear and this is simply a speculation-led OpEd article.

In the meantime, Disney Fanatic will continue to cover Disney Movie news as it develops.

Disney Pixar’s Lightyear will tell the definitive origin story of the Toy Story toy. In the Toy Story Universe, the Buzz Lightyear action figure voiced by Tim Allen was based off of a human Buzz Lightyear voiced by Chris Evans (Captain America). We know that the Space Ranger ends up jumping over 60 years in the future where he has to face down Evil Emperor Zurg with a ragtag group from the remnants of Star Command.