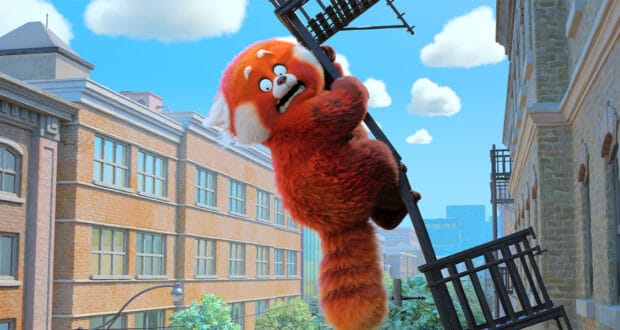 People have praised the latest Disney-Pixar animated feature film, Turning Red (2022), for its originality and unique deliverance of a one-of-a-kind storyline. I agree that there are several novel aspects at work within the film, many of which we’ve yet to see play out in prior works of animation from Walt Disney Entertainment. One example is the way adolescence is addressed.

Viewers will immediately notice how the subject is tackled in a much more thematically mature manner than we’ve seen in earlier productions, like the 2015 box-office hit Inside Out. Also, in a break from monotony, I have to say that it’s a refreshing change to finally see a film that’s set in Toronto, Canada rather than an overly cliché “big city” in the United States, like New York, San Francisco, or Los Angeles. Therefore, in many regards, Turning Red has in fact turned a corner in offering up something new and refreshing.

However, when I hear people say that it is an entirely new kind of movie that presents a never-before-seen story arc, I have to disagree. There have been countless manifestations of the film’s primary plot devices utilized in former storylines time and again. In fact, if you asked me to describe my personal take on Turning Red, I’d characterize it as being Joy Luck Club meets the Michael J. Fox version of Teen Wolf (1985) meets Disney-Pixar’s Brave (2012).

In noting the latter example of Disney-Pixar’s Brave, it goes without saying that Disney has a long history of presenting animated films that deal with onscreen character transformations from one species into another. So, in reality, Turning Red is actually right at home in joining the long lineup of a beloved preexisting Disney trend that we’ve been appreciating for decades. Here are a few other instances when Disney has brought us transformative plot lines, and how each one compares with Turning Red.

Related: Take Your Picture With Mei From ‘Turning Red’

Excluding the whole bit about the Evil Queen disguising herself as a hag in Snow White and the Seven Dwarfs (1937) Disney’s feature-length adaptation of Pinocchio presents us with the earliest example of an onscreen character transformation as depicted through an animated film by Disney. In this case, the transformation centers around a wooden marionette puppet being brought to life on a trial basis to prove himself “brave, truthful, and unselfish,” in order to sustain his new lifelike status and even emerge further into becoming a real-life little boy in the flesh. Although it is a bit of a stretch to compare Pinocchio with Turning Red, it is a fact that both deal with self-changes and the adjustments one must make after having undergone a transformation from a previous state of being.

This animated classic from 1959 delivers on all the works, as far as fairytales go. Here you have a princess, fairies, magic spells, evil curses, and all that good stuff. It’s through this film that we are also introduced, for the very first time, to the one who would go on to be known as Disney’s most infamous epitome of evil villains—the one and Maleficent. One of the most epic events in the movie occurs when Maleficent transforms into a huge, menacing dragon. And this tactic worked great in delivering shock and surprise to moviegoers the first time around. But when we draw parallels between this climax and the one played out in Turning Red involving Meilin Lee’s mother, it really doesn’t catch us off guard so much, and gets a little too predictable.

Related: ‘Sleeping Beauty’ Gets Another Retelling

Character transformations also played a major part in Disney’s animated adaptation of The Little Mermaid, from 1989. In fact, the entire story is about a mermaid wanting to become a human and going to great lengths to achieve her goal. So here is a classic example of trying to change one’s species to fit into a more commonly accepted “human” mold. While not entirely the same, this isn’t so unlike the motive at work in Turning Red, to go through with a ritual for permanently preventing an “inherited” problem in order to remain a full-time human being.

Both the animated as well as the live-action versions of Disney’s Beauty and the Beast offer one of the broadest examples of onscreen character transformations on such a grand scale. With enchantment again at work as the very essence driving the plot, here you get to see not only one of the film’s two titular protagonists transform from a human into a monstrous beast, but you also have an entire palace staff succumbing to the curse as well. While the latter all become various props, utensils, and furniture pieces, the prince who is more defined by his identity as a beast, shares at least some of the same human-to-animal burdens as Mei.

Related: ‘Beauty and the Beast’ Continues to Receive Special Attention For Its Thirtieth Anniversary

While this less-popular animated Disney film remains in obscurity even to this day, it still offers up another example in which we get to see a human-to-animal transformation take place onscreen. In this case, it revolves around an ancient Alaskan tribe of brothers, spirit animals, and an unfortunate tragedy that results in one character being transformed into his own detested spirit animal—the bear. Like Mei Lee, Kenai—the man-turned-bear—Isn’t all too thrilled to have had his species changed against his will. And it takes a lot of adapting, learning tough lessons, forging new friendships (with those previously seen as the enemies), and realizations to finally make peace with himself and rediscover what’s truly inside of his heart.

This is possibly one of the most popular modern animation examples of character transformations to unfold within a Disney-Pixar film. When Brave first came out, back in 2012, it set the record for many notable deviations. Merida was the first-ever Disney Princess from Pixar, she was more tomboy than damsel, she wasn’t saddled with a love interest, and most importantly, she did not follow that all-too-common motherless trend that other Disney Princesses tend to fall into. And it is that last point that drives the mother-daughter banter-based story arc.

It’s also the primary cause for the onscreen transformation we see played out in this film. Similarly, the problem in Turning Red is also caused by a mother-daughter clashing of sorts, although the animal transformations here are in reverse. So, while Brave set the precedent for original plot tactics such as these when they were still new, it would be more accurate to conclude that Brave was the original for such originality at work, and Turning Red, at best, merely followed suit.

Related: ‘Turning Red’ & ‘Encanto’ – When Did Disney Get Such Bad Mommy Issues?

Aside from Turning Red, the most recent example of onscreen character transformations at work within Disney-Pixar Animation occurs in the film Luca from 2021. Set along an Italian coastal town that’s fearful of sea monsters, the movie takes a page from The Little Mermaid in creating a storyline about sea creatures coming to live on land. In this case we have our primary protagonist, Luca, who happens to be a young boy sea monster.

While he loves and respects his family, an act of rebellion takes him onto the shores where he discovers that when not wet, he can transform into a human and live an alternate life. It goes without saying that the whole bit about having love for one’s family, albeit rebelling against them and doing your own thing with the transformative abilities you just happen to be in possession of, are clearly precursors for Turning Red.

Related: Disney & Pixar’s “The Art of Luca” Book is Available Free Online for a Limited Time

I am not denying that Turning Red does present a unique, enjoyable quality, offering up a movie-watching experience that’s entirely its own. But I still wouldn’t consider it to be a revolutionary first, free of predictability or innocent of implementing old school tactics already known to work well. All the same, the film does successfully echo all the right Disney sentiments in all the right places. Therefore, it’s safe to say that it fits in perfectly with Disney’s ever-growing family of transformative animated feature films.