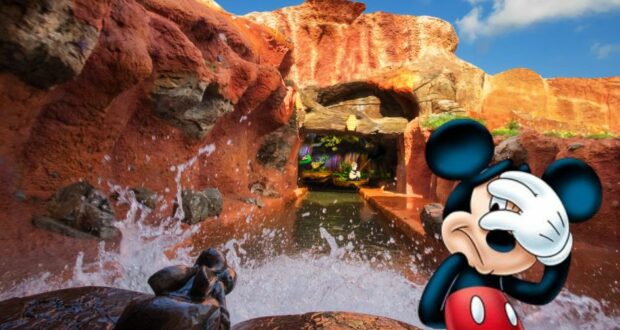 Splash Mountain is making a big SPLASH in the news recently. Surrounded by its controversial transformation, the real concern now is why do the boats keep sinking? That’s right… for a THIRD time now, a Splash Mountain ride vehicle was videoed sinking at Walt Disney World Resort.

Big news recently landed that Splash Mountain’s future name will be Tiana’s Bayou Adventure. Disney has plans to transform the iconic Song of the South (1946) themed attraction with Br’er Bear, Br’er Fox, and Br’er Rabbit being removed for good at both Walt Disney World and Disneyland Resorts.

Princess Tiana from The Princess and the Frog (2009) will take center stage in 2024 as the water ride will be transformed from Splash Mountain to Tiana’s Bayou Adventure. We’ve already seen the first look at Tiana’s adventurous outfit, along with a couple of artistic renderings of what’s to come.

But, more pressing – the mechanics of Splash Mountain aren’t currently keeping Guests afloat before the big transformation. First, a Splash Mountain boat sunk in August 2020 at Walt Disney World’s Magic Kingdom. A video of a second boat sinking in April 2022, also at Magic Kingdom, went viral. Now, for a third time, a boat sunk on July 12, 2022.

A clip of the Splash Mountain ride vehicle sinking was posted to social media by Twitter user @MagicbandManiac:

The full video was initially released on Facebook on July 12, 2022, by Ted Klein noting, “So, this just happened on Splash Mountain. Edit- They went down the big drop with their boat halfway sunk and they were trying to get someone’s attention before they started going up. This is at the very end of the ride. They were lucky that they only got wet.”

A comment on the video posted by Jennifer Jean notes, “I was in the boat behind them as well. It’s a little more than two feet, probably 2 1/2 because the people in the back were up to their waist when they were getting out, but think about it, you’re sitting and have a bar across your lap in this ride (not to mention there were kids in the boat who are smaller) so it’s not like it’s easy to just stand up. And, if you’re like me and paranoid, you push that bar down until it’s hard to breathe because you’re afraid of falling out when going down the drop.”

“The worst part of it all was that there were zero Cast Members to help them. They were sinking, waving their arms, and yelling for help and no one came to help. I thought Disney was always watching?? One of the men literally had to go find a Cast Member and bring him to the boat. How does this happen and no one is aware?!?!”

There has been some conspiracy that Disney is intentionally neglecting Splash Mountain by not spending the time or money to fix select components of the attraction. That said, we truly believe Disney would make sinking boats a priority issue to correct!

We’ll be sure to keep Disney Fanatic readers updated as we learn more about the incident, or if Disney issues a statement regarding its third sinking boat on Splash Mountain.