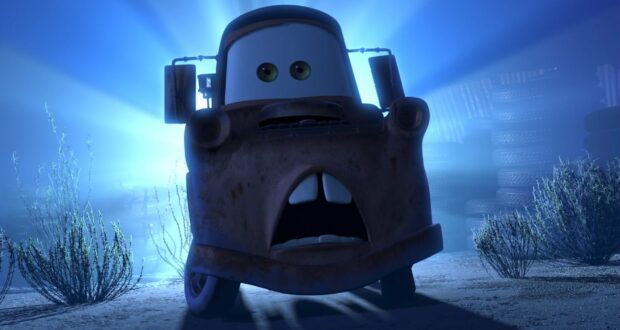 In the mood for some spooky (but not scary) Halloween entertainment? Disney+ has us covered with lots of great Halloween movies and shows to keep us occupied all October long on their “Hallowstream.” Whether it’s your go-to weekend movie night destination or you’re just looking for something atmospheric for a Halloween party, Disney+ has a huge Halloween collection with choices for every fan.

Let’s get into our favorite Disney Halloween specials, movies, and episodes, shall we?

Muppet fans, rejoice! This original special features our favorite Muppet pals and the Disney parks classic attraction, The Haunted Mansion. The adventure takes place on Halloween night, when The Great Gonzo takes on the frightful challenge of spending the night in The Haunted Mansion — a haunted house like no other. And of course, there’s bound to be lots of hijinks featuring your favorite Muppets, like Miss Piggy, Kermit, Fozzie, Pepe, and others!

Poe and BB-8 find themselves on Mustafar after an emergency landing. While they wait for their X-Wing to be in good flying shape again, they find themselves touring a super mysterious spot: Darth Vader’s castle turned Sith-inspired all-inclusive resort! If that ever becomes a real thing, sign me up immediately and move over, Galactic Starcruiser!

Have you ever seen a cuter duo than witches in training, Minnie and Daisy? This cute new special for Disney Junior features our favorite Count Mickula, and the rest of the gang. And what good is a Mickey and friends episode without our favorite (sometimes) baddie, Pete?

This Halloween special, based on the hugely popular Toy Story films, made its debut in 2013. Years later, we’re still loving this mysterious tale. Join Woody and the gang on a road trip to Bonnie’s grandma’s house. Things go very wrong when the family must stay overnight at a roadside motel, and things start to get spooky!

A cult favorite, this Disney Halloween movie is always in season among fans. Join Jack Skellington, the Pumpkin King as he searches for new meaning in his life, and finds it in Christmas Town. Unfortunately, Jack and his friends, the citizens of Halloweentown, don’t quite understand what kind of gifts all of the good girls and boys are expecting. If you’ve somehow never seen this Halloween classic, be sure to check it out this month!

This film is so popular that it has become a pop-culture staple. From children’s books to housewares to clothing and accessories, you’ll have no trouble finding Nightmare Before Christmas merchandise to satisfy the biggest of fans.

Here’s one that’s so cute, it’s scary. As usual, the adorable Golden Retriever pups are teaming up to defeat a villain! This time, it’s up to the pups to defeat Warwick the Warlock. Of course, they’ll be wearing adorable costumes while doing so.

What’s Halloween without the Sanderson Sisters? This Disney movie only seems to gain more of a following as time goes on, and it’s no wonder. Each witch is funnier than the next.

Here’s another great choice if you’re looking for a not-so-scary movie! The 2003 Haunted Mansion film starring Eddie Murphy is not exactly critically-acclaimed, but it’s fun nonetheless. Anything based on the actual Haunted Mansion is a win in my book!

Adventures of Ichabod and Mr. Toad

The first half of this animated film tells the story of our beloved Mr. Toad, which is certainly worth watching (but not particularly spooky or Halloween-ish). It’s the second half of the film that retells the Legend of Sleepy Hollow and features the infamous Headless Horseman.

What could possibly go wrong when a boy figures out how to bring his pet dog back to life? Better yet, he inspires other children to do the same with their beloved animals in this 2021 film.

Related: 7 Tim Burton Films for Your October on Disney+

Imagine that you find out you come from a family of witches! That’s exactly what this film series is about. Disney+ has all four of these Disney Channel originals: Halloweentown, Halloweentown II: Kalabar’s Revenge, Halloweentown High, and Return to Halloweentown.

Another tween-fan favorite, the Zombies films are a hit among audiences who love the High School Musical and Descendants franchises. Secretly, we’re sure there’s plenty of parents dancing and singing along, too.

Twitches, a Disney Channel Original Movie, was popular enough to get a sequel, and you’ll find both on Disney+. When twin sisters discover each other for the first time, they also discover their magical powers and how to use them as a team.

Mr. Boogedy and Bride of Boogedy are blasts from the past, which can now be seen easily on Disney+. This strange tale tells the story of a family who moves to a New England town, only to be haunted by ghosts! It’s a little (okay, a lot) cheesy, but very fun.

Maleficent and Maleficent: Mistress of Evil

Though not Halloween-specific films, the Maleficent movies are definitely dark and spooky! Spooky season is the perfect time of year to learn about the misunderstood villain’s backstory.

Mater and the Ghost Light

If you haven’t watched Mater’s Tall Tales, you simply must! The entire series of shorts is great, but this particular episode is especially fun for spooky season!

The Ghost and Molly McGee

The Ghost and Molly McGee is a new addition to get you into the Halloween Spirit. Molly McGee is an optimistic young lady who lives to spread good vibes. Unfortunately, she ends up magically bound to a cranky ghost named Scratch. Can they handle their differences? You’ll have to tune in to find out!

The Scariest Story Ever Told: A Mickey Mouse Halloween Spooktacular

If you’re a fan of the new Mickey Mouse cartoons, be sure to catch this episode from Season 4. Can Mickey succeed in telling Huey, Duey, and Louie the scariest story ever?

The Simpsons Treehouse of Horror

Looking for something entirely different? Don’t forget that Disney+ includes The Simpsons, so you may want to check out their catalog of annual “Treehouse of Horror” episodes! Keep in mind that The Simpsons is quite different from many of the other non-threatening picks on this list, so be warned that you may very well see a cartoon character impaled by a sharp object if you go down this road.

Disney+ is home to lots of popular Disney TV shows, both current favorites and hits from years past. Included in those lineups are Halloween themed episodes. You’ll even find Halloween-themed episodes of America’s Funniest Home Videos!

There’s also a section with episodes from Disney Channel favorites like The Suite Life of Zack and Cody, Hannah Montana, Phineas and Ferb, Lizzie McGuire, Wizards of Waverly Place, and Girl Meets World. Each of these series (and more) has a Halloween episode available on Disney+.

What are some of your favorite kid-friendly, family favorite Halloween TV shows, specials, and movies to enjoy during Halloween Season? For a complete list of everything available in the Disney+ “Hallowstream”, check out Hallowstream Specials Coming This Fall to Disney+.