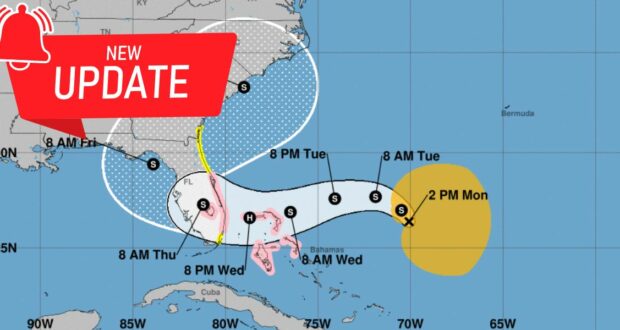 The latest name storm of the 2022 Hurricane Season has formed, and it is still heading for Walt Disney World.

According to the latest advisories, the storm is expected to take a sharp left turn, crossing The Bahamas and making landfall in Florida Thursday. Hurricane watches are now in effect for Central Florida counties.

NHC has issued an intermediate advisory for #Nicole; Here's a look at the latest image and stats…

“At 1100 AM AST (1500 UTC), the center of Subtropical Storm Nicole was located near latitude 26.3 North, longitude 69.6 West. The storm is moving toward the northwest near 9 mph (15 km/h). This motion with a decrease in forward speed is expected later today. A turn westward or west-southwestward is then forecast Tuesday through early Thursday. On the forecast track, the center of Nicole will approach the northwestern Bahamas on Tuesday, move near or over those islands on Wednesday, and approach the east coast of Florida by Wednesday night.” 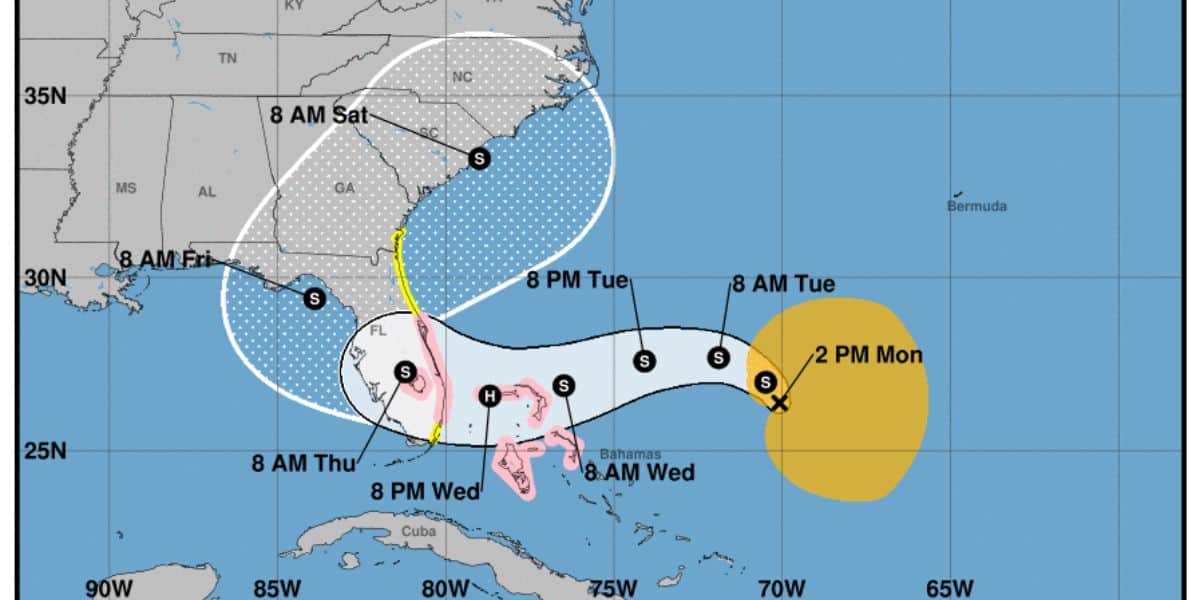 Even though Nicole is still a Subtropical Storm at the moment, Tropical Storm watches and even Hurricane Watches are now in effect for most of Florida’s East Coast. It is expected to hit the vicinity of Walt Disney World Resort, Universal Orlando Resort, and the Orlando Metro Area on Thursday, November 10.

Wanted to post this graphically, in addition to just typing about it.

Brevard County is now under a HURRICANE WATCH, meaning hurricane conditions are possible within 48 hours time. That means it's time to secure your homes;

Much of the rest of our area under TS Watches. pic.twitter.com/UrDfvPVPFE

Storm surge of up to five feet is expected along the East Coast as well, including the Disney Cruise Line homeport of Port Canaveral. According to the Orlando Sentinel, Governor Ron DeSantis has declared a state of emergency in preparation for the storm’s arrival:

“While this storm does not, at this time, appear that it will become much stronger, I urge all Floridians to be prepared and to listen to announcements from local emergency management officials,” DeSantis said in a press release. “We will continue to monitor the trajectory and strength of this storm as it moves toward Florida.”

A Storm Surge Watch has been posted for our coastal locations. 3-5' storm surge is possible… pic.twitter.com/a5sNwRawrh

According to weather.com, Walt Disney World Guests should expect lots of wind and lots of rain this entire week. The worst of the weather is expected to hit on Thursday, with expected winds between 40-60 miles per hour. But the weather should begin to clear around Saturday, November 12.

It should be mentioned that Walt Disney World Resort is one of the safest places to be in the entire state of Florida during a hurricane. It is doubtful that this storm would lead to a closure of Theme Parks like Hurricane Ian a few months ago.

We at Disney Fanatic will continue to update our readers on this storm as more developments come to light.

Going to Disney World for Veterans Day? Time to Start Watching the Weather