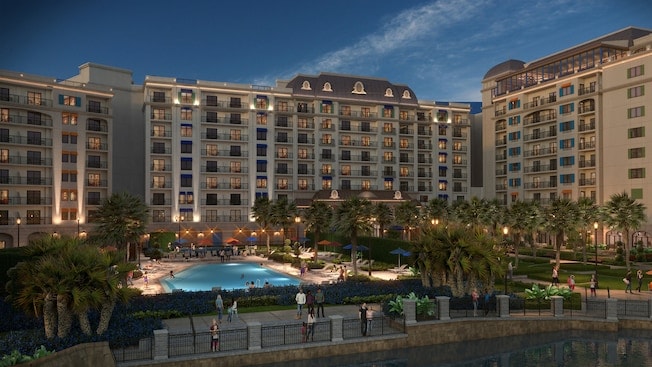 Inspired by Walt Disney’s family travels throughout Europe, particularly the Riviera regions of Italy and France, this new Vacation Club Resort property will transport guests to Europe while retaining the magic of Disney and its European inspirations at the forefront. Unique perks to be revealed in this resort include the premier of a brand new room accommodation designed for parties of two, a stellar signature rooftop restaurant and other delightful dining options, and direct access to the new Disney Skyliner System, amongst many other points to brag about. While the new Star Wars-themed hotel and Disney’s Riviera Resort will be located within the Epcot  (Hollywood Studios) Resort Area, Disney has also quite recently unveiled plans to open a new, still unnamed luxury resort within the Magic Kingdom Resort Area.

While details are still largely unknown about this latest concept, what we do know is that the resort is being developed on the abandoned grounds of what was once Disney’s River Country and will follow a nature-inspired theme. The targeted opening date as of now is set for 2022. Resort reports are always in active development at Walt Disney World Resort, so it’s important to stay on top for all the latest details.

And on that final note, we now turn our attention to the recent refurbishments that several Disney Resorts have undergone recently and are still undergoing. One such work-in-progress worth mentioning is the Gran Destino Tower—the 15-story expansion currently underway at Disney’s Coronado Springs Resort. Once completed, Gran Destino Tower will add 545 new guest rooms to the mix, including 50 suites, and will boast a new two-story lobby, tower-top restaurant, and plans for a second new restaurant, along with other novel perks.

Additionally, Disney has revealed plans for many exciting new restaurant concepts to hit the parks and resorts in coming years.  Back in 2017 we first got word of a planned space-themed restaurant coming to Epcot. Located between Epcot’s Mission Space and Test Track attractions, this new out-of-this-world eating establishment will even sport a 250-foot digital screen laden with stars, meteors, and other effects (including outer space views of Planet Earth) in order to create the illusion that guests are looking through the window of a space station as they dine.

While many details are still unknown at this time in regards to cuisine and other specifications, what we do know is that this new restaurant will be a table service venue and at this time is being referred to as “Space 220,” though we do not know if this will be the official permanent name. There is no official opening date slated, but construction is already well underway and the goal is set for sometime before Walt Disney World’s 50th anniversary in 2021. Also opening in Epcot, in conjunction with the aforementioned updates to the France Pavilion, is word of a new authentic crêperie. Serving as both a table service restaurant as well as quick service spot, this delightful new dining venue is being constructed in close proximity to the Remy’s Ratatouille Adventure attraction and will feature authentic regional cuisine inspired by Brittany, France. It too is slated to open in time for the 50th anniversary. On one other epicurean Epcot note, the Japan Pavilion has also revealed plans for an all-new signature dining steakhouse.

Other future Disney restaurant announcements include those that are part of the aforementioned resort expansions and several exciting grand openings expected in nearby Disney Springs. But Disney’s most recent culinary callout, a new table service restaurant coming to Toy Story Land in Hollywood Studios, is perhaps the biggest scoop of all (at least for the present). The restaurant will be called “Roundup Rodeo BBQ,” and as the name implies, the menu’s mainstay features will largely consist of barbecued favorites. It will be located in Andy’s backyard, with a design concept to look like three cardboard boxes that have been taped together by Andy to form a colorful rodeo-themed arena for his toys to play and dine in. Currently there are no other details on the tentative opening date or menu-specific features.

9. A Guardians of the Galaxy rollercoaster

We’ve already touched on several highlight developments that are both currently and conceptually taking shape throughout Epcot. But for enthusiastic Marvel fans, the most highly anticipated park attraction of all is the all-new Guardians of the Galaxy-themed rollercoaster, slated to open in 2021 as part of the 50th anniversary. Construction is currently underway at the former Universe of Energy Pavilion, paving the way for this milestone coaster, which already sports two claims to fame.

First off, this is expected to be the world’s longest enclosed rollercoaster attraction ever built, and secondly, it will be the largest ride in general to have ever opened in all of Walt Disney World. With this attraction, Disney Imagineers are unveiling an exciting new innovative ride system that will enable each riding cab to move about independently from all others, directing each rider’s eyes to the story as it unfolds and offering a different riding experience each time.

And as for the storyline itself, while we do not know all the specifics we do know that it’s going to be a uniquely original plot developed exclusively for this ride. What’s more, given the large expanse of the area the attraction encompasses, guests can expect a whole host of other additional Guardians of the Galaxy-themed experiences going on about them to enhance the thrill of it all.

Magic Kingdom Park also has plenty to report in the way of updates, one of which includes the installment of an all-new Tron-themed attraction over in Tomorrowland. Already a well loved ride at Shanghai Disney, TRON Lightcycle Power Run follows a coaster-cycle layout that allows guests to experience firsthand a most thrilling motorcycling experience, as featured in the 2010 Tron: Legacy movie. For this, riders mount their own individual two-wheeled lightcycle vehicles, which then race along tracks (both indoor and outdoor) at speeds of nearly 60 miles per hour.

The attraction at Shanghai debuted in 2016 along with the park’s opening, and quickly became the highest-rated ride. We have no doubt that the Magic Kingdom installment will become a new favorite as well. The opening date for this one is also slated for 2021, just in time for the Walt Disney World 50th Anniversary.

While we’ve touched on a lot of exciting new attractions coming to Walt Disney World Resort, there’s still one that, for many guests, is the most highly anticipated happening of all. It’s none other than the opening of Star Wars: Galaxy’s Edge. Located in Hollywood Studios, this brand new land spans an impressive 14 acres, making it the largest Disney World-based land to date. And, as the name most obviously implies, this new land serves as the ultimate utopia for any diehard Star Wars fan of any age.

As guests enter this enticing new land, themed for a never-before-seen planet of Batuu based in the Star Wars universe, they experience a host of novel innovations, from premier technological advances that include stunning life-like animatronics to the unveiling of other various sights and sounds all around. Two new attractions are introduced here as well—Millennium Falcon: Smuggler’s Run, which premiered in conjunction with the land’s opening, and then Star Wars: Rise of the Resistance, which will open in December 2019.

Additionally, Galaxy’s Edge also introduced a whole host of other Star Wars-themed experiences for guests to delight in as well, including new shopping and dining venues. Stop in at Savi’s Workshop or Droid Depot, where you can even customize lightsabers and droids, or grab some intergalactic grub at Docking Bay 7 Food and Cargo and a libation at Oga’s Cantina. Take a taste of some blue or green milk at the famously named “Milk Stand” or try some other quenching picks from Ronto Roasters. Kat Saka’s Kettle is also an excellent option for out-of-this-world snacking. The thrills and themes just go on and on! Best of all, eager fans don’t have to wait any longer to experience this new land as Star Wars: Galaxy’s Edge is currently open and recruiting fighters for the Resistance!

There are numerous other updates going on all around Walt Disney World, from enhanced films coming to some of Epcot’s World Showcase Pavilions to additions in existing attractions, like Rivers of Light at Animal Kingdom, which is soon to become Rivers of Light: We Are One. There are also several delightful limited engagements taking place, some of which are already going on, as well as fabulous expansions throughout nearby Disney Springs, including the newly opened NBA Experience. With Disney you know that anything and everything new is bound to be magical.

Left 3 of 3 right
Next: The Hottest Attractions Coming For Disney's 50th Anniversary