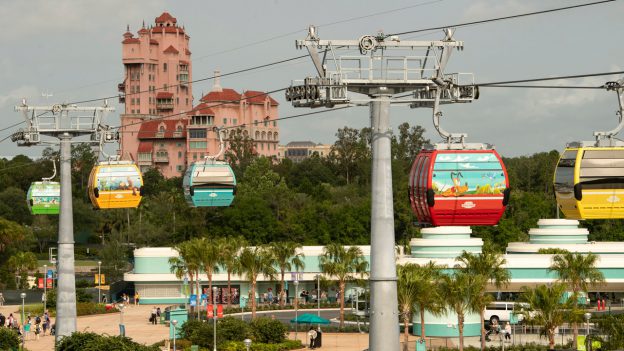 The magic of Disney is rapidly growing, as evidenced through the vast array of shows, movies, and entertainments as well as the forever-emerging developments seen in Disney Parks around the world. What’s more, the already seemingly perfect attractions Disney Parks are known for are constantly being enhanced or altogether reimagined to create new opportunities and lasting legacies you wouldn’t have thought possible to even improve upon. Walt Disney World Resort has announced several upcoming updates and additions for the near future, with some slated for as early as this year and others planned to take a little longer. Here’s a look at just some of the hottest attractions you can expect to see soon at Disney World Resort.

One of the most talked about additions coming to Walt Disney World this fall is the new Disney Skyliner System. While not a Park “ride” in the traditional sense of the meaning, it’s an “attraction” all the same, as visiting guests are already eagerly looking ahead for opportunities to utilize this new form of transportation between parks and select Epcot Area Disney Resort properties. There are projected to be around 22 operating gondola cars, gliding between 15 and 60 feet off the ground and moving across more than six miles of far-reaching cables over land and even water. The gondolas are designed to carry up to 10 passengers at a time, moving at steady speeds of 11 miles per hour without stopping but allowing for guests to embark and disembark at designated points en route (with cast members along to assist).

It has been announced that Epcot’s long-running nighttime spectacular IllumiNations: Reflections of Earth will be lighting up the night skies for the last time in early autumn of 2019. But before you get too weepy, you should know that a brand new nighttime spectacular is in the works for 2020—one that will feature custom-built LED panels, massive floating set pieces along the World Showcase Lagoon, choreographed fountains, pyrotechnics, and lasers. The new show, rightfully named “A Celebration of Disney Music” will bring forth the theme of how Disney music has influenced and inspired people from all around the world. But before this new installment becomes a permanent mainstay attraction, Epcot is premiering a limited nighttime engagement experience called “Epcot Forever,” which is set to premier on October 1.

As the name implies, this show is all about Epcot’s past, present, and future and how it all started with a single “spark of imagination,” which then grew and evolved into something new and wonderful. Watch as fireworks, lasers, choreographed kites, classic Epcot Park music, and myriad dazzling effects come together for this ultimate epic Epcot evening extravaganza.

3. Beauty and the Beast sing-along

Epcot has plenty of other announced updates in the works for the coming years as well. Over at the World Showcase Pavilion’s France Pavilion, for instance, fans of Disney’s Beauty and the Beast will soon have the chance to partake of an all-new sing-along experience. The new sing-along is being developed by mastermind Don Hahn, producer of both the animated and live-action Beauty and the Beast films. And while we still don’t know all the specifics, we do know that this brand new experience will be offered in addition to the current Impressions de France film. Continued on next slide...