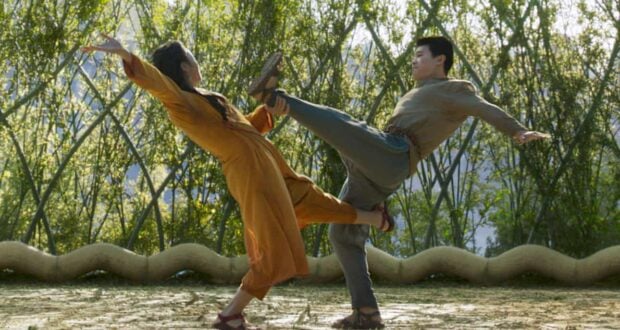 The Legend in Shang-Chi: Legend of the Ten Rings Is Not What You Expect

There is a legend that permeates the new Marvel movie “Shang-Chi: Legend of the Ten Rings“, but that legend is not the one that moviegoers should pay attention to: instead, it’s Michelle Yeoh. This cinematic powerhouse and martial arts icon has been leading and performing incredible combat stunts for decades, alongside the likes of Jackie Chan, Jet Li, Chow Yun-Fat, and more. She’s also one of the original Bond women. Americans will most likely know her for her recent turn as an intimidating matriarch (and future mother-in-law of the protagonist) in Crazy Rich Asians, but to think of her as just a romantic-comedy actress would do her a tremendous disservice! 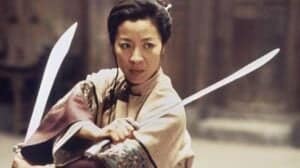 Michelle Yeoh has consistently impressed those she works with (including Oliver Stone, who referred to her as “a woman of elegance and magnificent grace – the young grande dame of Hong Kong cinema”) even turning Jackie Chan’s old-fashioned perception of women on its head when she “kicked his butt“, and she was one of the two striking female leads in the sweeping martial-arts drama “Crouching Tiger Hidden Dragon” that brought wuxia movies to America and won an Oscar. She established herself as a “one-take wonder” in the movie Yes, Madam, when she flew through the air, broke through a window with her head, and took down multiple enemies in the process (“thank God it was only one [take]”, she later joked).

Michelle Yeoh has endured grueling training for her stuntwork and was injured during one of the most famous “Crouching Tiger Hidden Dragon” fight scenes (above) with Zhang Zhiyi, but her resilience has kept her going. When Yeoh originally started out in action movies, she participated in many martial arts fights, and the stunts that she performed left viewers amazed. “People thought we were using green screens. Jackie [Chan] and I would look at each other, like, ‘what green screens’?” she told Instyle. Whether it was leaping from helicopters, heavy landings onto moving trains, or some incredibly high kicks to her opponents’s, Michelle Yeoh did it all. She now considers the moves that she performed to be a bit reckless, confirming that she “could have gotten really hurt”. 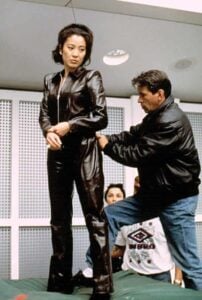 One only needs to see the below fight scene to notice Michelle’s charisma; she is captivating onscreen, but she also possesses a fierceness and discipline in her combat style that combine to inspire any martial arts fans who watch her work. Watching Michelle Yeoh fight is truly like watching a tiger or dragon; her hours and hours of training, over years, and her incredible respect for the art of combat merge with her raw energy and beauty to make her a fascinating star of the screen. Initially, it was hard for Yeoh to ascend through the ranks in the male-dominated world of martial arts, but the Miss-Malaysia-pageant-winner did not back down, training “until sundown every day”. Now, she is lauded for her commitment to the craft, and for her commendable status as an opponent. “The biggest respect you pay to the people you’re fighting is being accurate,” Yeoh has said. “So when they say to punch the person in the sternum, you don’t end up punching them in the throat.” 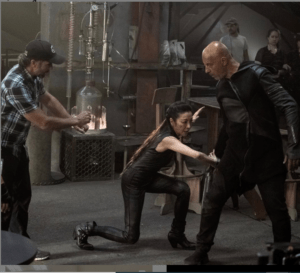 Yeoh still practices daily, and her recent martial arts films (in between lighter fare like Crazy Rich Asians) include Crouching Tiger Hidden Dragon: Sword of Destiny, as well as the series Star Trek: Discovery and the new movie Gunpowder Milkshake alongside Guardian of the Galaxy’s Karen Gillan.

Yeoh has been praised and awarded many times for her achievements in film (and for her performances in fight scenes like the one above), and fans can expect a taste of the legend within when they see her as Simu Liu‘s aunt in Shang-Chi: Legend of the Ten Rings. Does it help that Yeoh is beautiful, elegant, well-spoken, and intelligent? Of course; however, it’s her devotion to hard work and her years of experience that have made her the true legend in Marvel’s newest story.