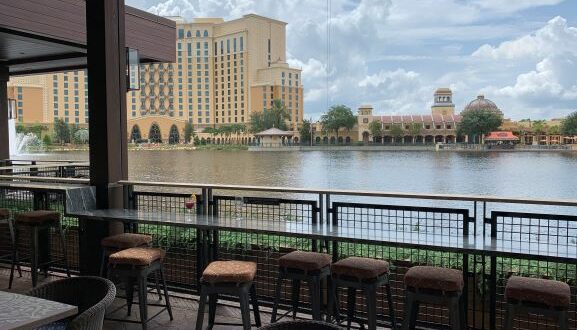 Three Bridges Bar & Grill at Villa de Lago is one of four newer dining establishments to open at Disney’s Coronado Springs Resort following extensive renovations that concluded in early summer of last year. With the three other dining designations located directly within the walls of the resort’s newly constructed Gran Destino Tower addition, Three Bridges Bar & Grill stands out from the crowd independently, as its own unique venue on the water. From giving guests an equally unique, one-of-a-kind, open-air lounging experience to making for an exotic epicurean excursion like no other, we can provide you with countless reasons for why you’re simply going to love it here! Here are seven to start with.

While there are several waterfront dining venues that do provide stellar views of the surrounding bodies of water along a given location’s premises, it’s a much rarer experience in which you actually get to dine directly on the water, right in the middle of a lake, no less. But that’s part of what makes dining at Three Bridges Bar & Grill such a premium experience. By taking a series of three different bridges from the resort’s surrounding mainland areas, you trek into the heart of the Coronado’s pristine 14-acre resident lake “Lago Dorado,” where sits the centrally located on-the-water island-like venue known as the Villa del Lago. It’s here you will find the Three Bridges Bar & Grill Restaurant and enjoy a relaxing, lavish dinner quite literally overlooking the beautiful surrounding waters in one of the most one-of-a-kind, unexpected ways imaginable.

Dining directly on the water allots some of the most phenomenal views of the all-encompassing Lago Dorado and the surrounding pristine scenery of the resort. The restaurant’s unique vantage point provides dinner guests with some of the most optimal panoramic sights of the surrounding shore scape along with impressive glances at the high-reaching Gran Destino Tower in all its zenith fortitude. And in more ordinary conditions, when nearby Parks like Disney’s Hollywood Studios and Epcot are carrying out regular fireworks shows, Three Bridges Bar & Grill could make for a wonderful spectator spot. But whether there are fireworks or not, the on-the-waves experience doesn’t get any better than this!

One of the key elements working in tandem with the restaurant’s on-the-water location to deliver on stellar surrounding views is the open space and lack of obstructing walls. That’s because, for all intents and purposes, Three Bridges Bar & Grill is an entirely open-air al fresco dining experience. Of course, the restaurant does provide overhead coverage and protection from the elements, but the overall feel is largely that of a dine outdoors setting. The open-concept interior does a lot to welcome in and charm dinner guests, with dangling light fixtures, a kindling fire pit, and other cozy touches that stave off even the dreariest, rainiest days and provide for comfortable mealtimes regardless of whatever weather conditions may or may not be brewing.

Three Bridges Bar & Grill provides for a most remarkable balance between comfort and sophistication, in which neither characteristic upstages the other. And when we highlight the aspect of comfort at work here, one of the most alluring aspects not to be dismissed is undoubtedly the freedom to pick and choose your own seating selections. That’s right, it’s all up to you—the diner—to decide on where in the restaurant you’d like to dine and in what designation. Options range from traditional table and chair models, comfortable sofa/loveseat selections, barstools, and more. In addition to dining within the usual restaurant space, you should know there are additional access spaces within Villa de Lago, including larger meeting areas for events, conferences, and otherwise more crowded gatherings.

In touching on the décor and design elements at work within Three Bridges Bar & Grill it goes without saying, as is the case with most Walt Disney World Resort designations, there is a creative underlying theme at play. As you may be well aware of by now, Disney’s Coronado Springs Resort is largely patterned after Spanish influences, with dominant themes based primarily on the Spanish influences on New World colonization and integration. Different areas of the resort utilize the theme in distinctly diverse ways, focusing on the versatile ideas and methods in which many regions within the Americas have integrated such varying influences, from the Southwest to the more tropical/beachy vibes of the coasts. The themed motif that Three Bridges Bar & Grill Restaurant weaves into its setup is one of adventuring to and exploring new uncharted territories. You set out as explorers, ready to embark on a most elaborate excursion into the epicurean, trekking across bridges to uncover a rare and treasured experience in dining upon the water. We feel the theme is an undeniably fitting choice for such a venue and works well with the open-air concept, lack of solid walls, and accompanying accented décor and personality of the design elements—ready to embrace all elements in a most exotic way.

While not as overly obvious as some other venues in calling out thematic references in Disney design and décor, Three Bridges Bar & Grill is not without its illustrative inclusions of the aforementioned. They’re just more subtly interlaced into the setup as not to dominate the working motif we mentioned previously. All the same, Disney is Disney nevertheless. And if you look real closely you will see that it is a “Disney World” after all. Look carefully at the iron casing patterns near the ceiling, for instance, and you may just spot a Hidden Mickey. Likewise, be sure to look at the patterns on your table and you may just catch a glimpse of those familiar Mickey ears etched in here as well. Then, fans of Disney’s Ducktales will “quack up” over the most obvious Disney presentation of all—a clipping of a Ducktales comic, alternately known as Uncle Scrooge Adventures! Given the working storyline of exploration and discovery within the restaurant, this comic clipping following the adventures of Scrooge McDuck and nephews Huey, Dewey, and Louie is a most appropriate prop to include.

So far we’ve highlighted plenty of reasons for why you’re simply going to love Three Bridges Bar & Grill, but thus far we have not addressed what is perhaps the most obvious one of all—their spectacular food and drink presentations. Both categories go above and beyond usual expectations in dining to deliver on unique signature invents that are entirely exclusive to the establishment. Even those familiar options you find on the menu pack a versatile, personalized kick that’s sure to please any palate. An appetizer like a corndog, for example, may at first seem like a typical street food and somewhat of a casual letdown at a one-of-a-kind eating establishment you had high hopes for. But then when you see the overall presentation of these stellar signatures, which are actually of a fried shrimp variety, delivered to your table alongside smoked paprika fries and accompanied by both aioli and remoulade dipping sauces, you see that even the most casual items are elevated to a more elite status. Other phenomenal food choices include Szechuan Peppercorn Wings, Warm Manchego and Oaxaca Cheese, and versatile variations on salads, sandwiches, and other original entrées. And don’t forget about the kids, with special menu items available to even the youngest epicurean explorers here, even including create-your-own meal options and non-alcoholic beverages as well.

For those who are of more mature age and tastes, do take note of the bountiful beverage selections to choose from. Wide-ranging options span from specialty cocktails, sangrias, wines, beers, and just about any other spirited concoction you already know about or are perhaps experiencing for the first time. There are infinitely far too many to list in their entirety, but some customer favorites we’ve found within the specialty cocktail listing include: the Sherry Cobbler, Santa Maria Collins, Espumoso Punch, Amaretto de Veraño, Port de Colada, Maracuyá Mojito, Bourbon Breeze, and many, many others.

There are plenty of elements at work in orchestrating a person’s final decision on why he or she may prefer a particular venue over another. And while we understand that specific menu selections, tastes, dining styles, and overall ambiance all play partial roles as initial deciding factors in the process, we feel confident that the unique appeal presented at Three Bridges Bar & Grill on all accounts can mutually endow charm and attraction to the vast majority of diners seeking something new and spectacular at Walt Disney World Resort. Do take note, Three Bridges Bar & Grill, as well as all of Disney’s Coronado Springs Resort is currently closed with phased reopening plans set for early this fall.