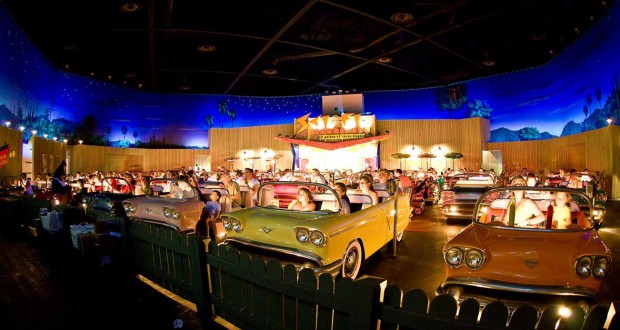 Depending on your viewpoint, Disney’s Hollywood Studios is either rightly or wrongly maligned. Some people can’t stand the Sorcerer’s Hat at the end of Hollywood Boulevard (good news – it’s coming down now!). Others love the wonderful assortment of rides to choose from and obsess over which Tier A attraction to select. Others still refer to Hollywood Studios as a half day park. Regardless of your position, there is a lot to enjoy at Hollywood Studios. The following is our list of the top 10 reasons you can’t skip Hollywood Studios!

10. Thrill rides – Hollywood Studios is home to Rock ‘n’ Roller Coaster featuring Aerosmith, the Tower of Terror, and Star Tours. These rides offer some great thrills for everyone to enjoy. Rock ‘n’ Roller Coaster is the only coaster at Disney that takes guests upside down (it also takes you zero to 60 in about 3 seconds)! Added thrills come from the fact that the ride is completely enclosed and dark! Tower of Terror offers a different ride each and every time you ride it, as well as some amazing views of the park. Star Tours is a fun ride that also changes every time you ride it, as well as a very interesting, fun queue.

9. Stunt Attractions – when Hollywood Studios was initially built in 1989, it was with the idea to showcase the “behind-the-scenes” nature of filmmaking. Two attractions are designed to allow the audience to go behind the scenes. Indiana Jones Epic Stunt Spectacular gives the audience the ability to see how the various stunts are filmed in the movies (and for a lucky few, they even get to participate in the show)! Lights, Motors, Action cranks the thrills up a little bit more and demonstrates the stunts and movie magic using cars, boats, and motorcycles. Guests should hurry to enjoy these attractions – the gossip around Orlando is that one or both of these attractions could be shuttered soon to make way for planned expansions like Star Wars Land, Pixar Place, and possibly a Cars Land.

8. Preview Center – using the ABC Soundstage located across from Star Tours, Disney has recently been previewing new attractions coming to the movie theatre. I was able to see an extended 10-minute preview of “Guardians of the Galaxy” this past summer. I think it is a great use of some dead space at Hollywood Studios, as well as much overlooked feature of the park. Additionally, you can always grab a soda and enjoy some time off your feet in the theatre.

7. Themed Dining – two of my favorite restaurants in the theme parks are located at Hollywood Studios. 50’s Prime Time Café is a throwback to the days of a true family dinner. The menu is classic American (my favorite is the sampler which features meatloaf, fried chicken, and pot roast with all of the fixins’). Be sure to mind your manners and to clear your plate; if you don’t, the wait staff will make sure that you do! You also get to enjoy clips from some classic black and white TV favorites. Sci-Fi Dine-In takes themed dining even further. Diners are transported to a drive-in movie where they get to enjoy their meal in the backseat of some classic cars. As the name suggests, clips from some B-movie science fiction movies play for your enjoyment! Be sure to try the picnic burger – a delicious combination of hamburgers AND hot dogs.

6. Shopping – of all the gift shops in the theme parks, I tend to find the most at Hollywood Studios. The stores line Hollywood Boulevard as you walk in, as well as Sunset Boulevard as you walk towards the Tower of Terror and Rock ‘n’ Roller Coaster. I love browsing in the shops to find a new t-shirt, pin, or BandIt for my MagicBand. Watch out for Sweet Spells on Sunset – they serve up some sinfully delicious baked goods and candy!

5. Muppet Vision 3D – this amazing attraction starts Kermit and friends in a wonderful 3D experience. My favorite part about Muppet Vision are the small treats that are hidden in the pre-show. Make sure you show up early and take some time to explore the soundstage and to watch the pre-taped video!

4. The Magic of Disney Animation – I recently had skipped this amazing attraction that features how Disney animators do what they do. You can also learn how to draw some of your favorite characters. Also located in the building are some character interactions that go unseen by a lot of guests!

3. Walt Disney: One Man’s Dream – this is an often overlooked attraction. Located just before Toy Story Midway Mania, the attraction showcases the history of Walt Disney and the creation of Disney animation and the theme parks. It also showcases some pretty amazing Disney park artifacts including Walt’s initial drawings and plans for Epcot. The attraction also features a 15 minute movie at the end detailing Walt’s life.

2. Fantasmic! – this attraction features Mickey and many other characters from the Disney catalog in their battle against the forces of evil and showcasing the power of imagination. The show is very popular, so if you do decide to attend, make sure you stake out seats early or that you reserve seats through one of the Fantasmic dining packages offered at select locations.

1. Toy Story Midway Mania – aside from the Frozen sisters at Magic Kingdom, this ride has the longest lines in the park. The ride is very addictive and fun for everyone in the family. You play a variety of different carnival games from the ring toss, to trying to pop balloons, and shooting balls to break plates. You battle against the other players in your car, as well as the other players that day. Definitely make sure to use a FastPass to get your spot in line for this ride. I have seen waits in excess of two hours for this attraction!

2015-01-28
Tyler
Previous: 7 Amazing Facts about the Under the Sea – Journey of The Little Mermaid in Magic Kingdom
Next: Top 10 Ways Disney Disappoints