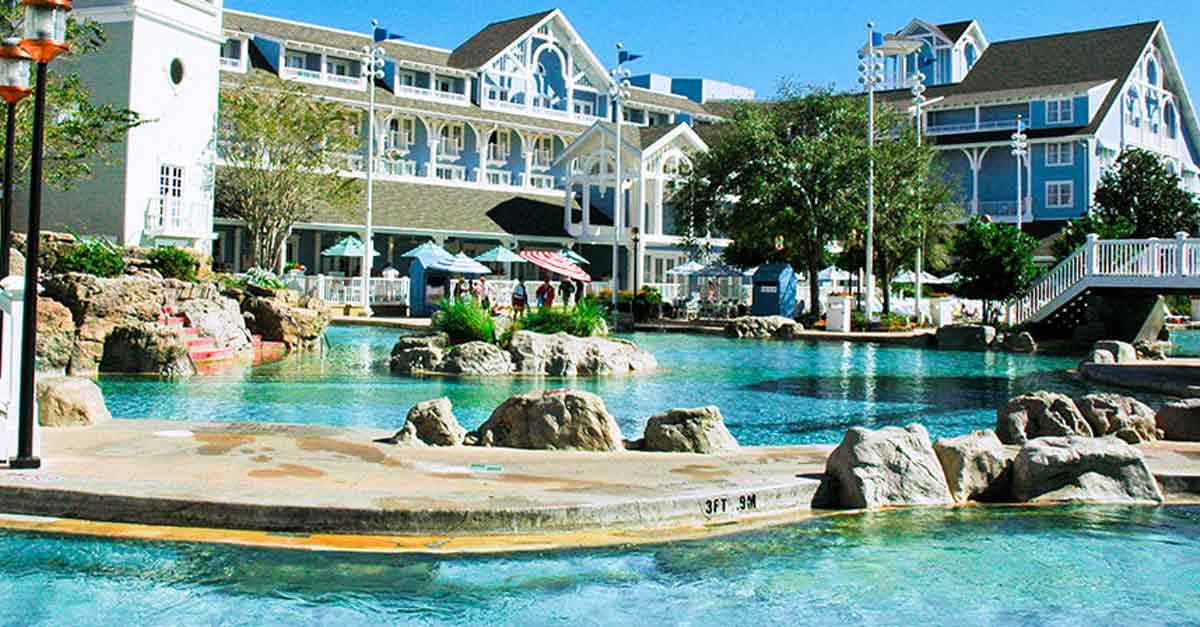 These two sister resorts within the Epcot Resort Area are similar in the fact that they both follow a New England coastal theme, with the Yacht Club taking on a more elite formal fashion and the Beach Club emanating a quaint, more nostalgic pastel-hued persona. Both hotels share in many of the same amenities and services, from dining to recreation, and even exclusive guest access to Stormalong Bay. Deciding on which hotel to stay in really depends on just two factors—taste in décor and room preference, as only Disney’s Beach Club offers villa accommodations between the two Deluxe Resorts.

Both options afford guests the same convenience in easily commuting back and forth between both Epcot and Disney’s Hollywood Studios. The distance is so close in fact, that those who are up for a bit of a walk can even take footpaths to both Parks from either resort. And for those who aren’t up to walking, there are continued Friendship Boat services between the resorts and parks throughout the day. With all the 50th Anniversary action and new park-wide developments, in addition to the activity hub of the nearby BoardWalk Pier and Fantasia Gardens and Fairways Miniature Golf, both Disney’s Yacht Club Resort as well as Disney’s Beach Club make for excellent options.

Another great suggestion when considering places to stay within the Epcot Resort Area, Disney’s BoardWalk Inn is perfect for those seeking nonstop activity and convenience to both Epcot and Hollywood Studios. Following a nostalgic turn-of-the-century theme reminiscent of Coney Island and old Atlantic City, Disney’s BoardWalk is highly sought out as both a place to book accommodations as well as to visit for all its lively ongoing activities, shops, restaurants, and entertainments via the BoardWalk promenade. As a Deluxe Resort it boasts hotel-wide amenities to make guest stays an uppermost experience in all ways imaginable.

Just check out the carnival-themed Luna Pool, or perhaps take part in a quaint surrey bike ride around the resort. There’s plenty to keep you entertained. And because staying here is such a highlighted venture, there are even different room styles and accommodation types available to suit your needs, whatever they may be. There are even villas for those looking for extended space to accommodate larger groups. And like we said, both Epcot and Hollywood Studios are but a pace away. So like the aforementioned Yacht Club and Beach Club Resorts, you may walk to both parks if you so desire, or ride along in one of the continued Friendship Boats for ongoing commutes throughout the day.

While not officially Walt Disney World Resorts, the unique placement of these two hotels and their utilization of many Disney services and amenities make both the Walt Disney World Swan and Walt Disney World Dolphin honorary Disney-approved accommodations nevertheless. And if you’re looking for convenience in navigating to and fro Epcot and Hollywood Studios, then you can’t go wrong with booking your stay at either one of these two sister resorts. Like Disney’s Yacht Club and Beach Club Resorts, guests at either the Swan or the Dolphin share in many of the same resort-wide perks and amenities with one another. Both are Deluxe Resort accommodations that reflect on the subtropical Floridian theme in color, style, and each hotel’s own large sculptures—dolphins for the Dolphin, and swans for the Swan.

They both feature fabulous onsite recreations and amenities, from swimming to shared spa services, fantastic dining (even including Disney character dining at Garden Grove—which doesn’t get much more Disney than that!), and so much more. And as we said before, these hotels utilize many Disney Resort privileges, including complimentary transportation to the parks via Disney’s ongoing bus services to and from the various parks, water parks, Disney Springs, and other Disney venues. But being so close to both Epcot and Hollywood Studios allows guests the same unique benefits highlighted in previous Epcot Area Resort options, including the chance to walk a footpath to both Epcot and Hollywood Studios as well as hop on one of the Friendship Boats in operation throughout the day.

Discover the tropical senses of the diverse Caribbean islands at this Moderate Resort. Also located within the Epcot Resort Area, Disney’s Caribbean Beach went through a multitude of developments over the last several years, enhancing what was already a carefree and fun island paradise experience even more. New dining options, resort-wide refurbishments and updates to existing amenities, and countless other highlights are all included in the mix. But perhaps the most obvious premier development here is the incorporation of the new Disney Skyliner gondola system.

Connecting four select Epcot Area Resorts to the Gateway at Epcot as well as Hollywood Studios, this new experience allots guests a bird’s-eye view from high in the sky, soaring above treetops, bodies of water, and so many other scenic wonders amidst Disney premises en route to the aforementioned destination stops (resorts and parks). As the next big thing in Disney’ Transportation Services, the Disney Skyliner definitely helps to put the Caribbean on the map. But with the resort’s many thematic elements, bright colors, onsite recreations, and myriad other highlights, it does just well for itself on its own merits as being a hot-ticket pick amongst places to stay, both in quality as well as price.

In considering pricing and possibilities for your family when planning out a Walt Disney World Resort stay, you can’t go wrong with a Value Resort. Amongst the more budget-friendly accommodations you’re likely to come across in Disney properties, even these resorts go above and beyond in quality and standard. Each Value Resort is characterized by larger-than-life icons of different characters or thematic elements throughout, going along with each resort’s own unique storyline and motif. F

or Disney’s Pop Century Resort, it’s a fun and fanciful celebration of pop culture crazes throughout the differing decades of the 20th century, ranging from the 1950s up through the 1990s. A timeless resort for all ages, old-timer nostalgic guests and newer generations alike, there’s plenty to love about this Epcot Area Value Resort. Onsite amenities and recreations are just the beginning, as one of Pop Century’s newest highlighted features is the fact that it too happens to be on the new Disney Skyliner gondola line. So again, this makes for easy commuting back and forth between the hotel as well as Epcot and Hollywood Studios. And as is true of all Disney Resorts, including Value Resorts, complimentary shuttle services are available throughout the day to carry you to other Disney Parks and nearby attractions.