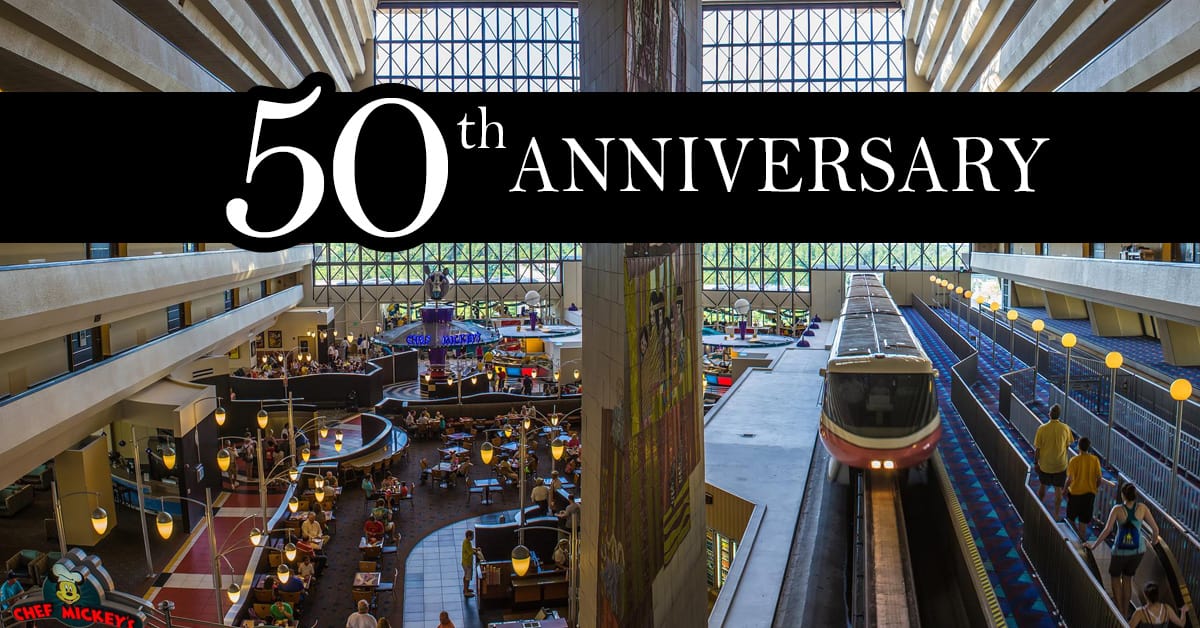 The year 2021 marks the 50th Anniversary of the opening of Walt Disney World Resort. And as any Disney fanatic knows, Disney likes to go all out in celebrating major milestones, and a 50th Anniversary definitely qualifies. While at the time of Disney World’s initial grand opening in 1971, there was only Magic Kingdom Park and two hotels, the 50th anniversary will be celebrated throughout each of Disney’s four theme parks and myriad resort properties. On that note, it goes without saying that booking accommodations on Disney property in the heart of all the magic is the most recommendable action to take if you are planning your visit to Disney World in part of the 50th Anniversary celebrations. While each and every Disney property has its own unique one-of-a-kind niche to consider, we recommend the following for those looking for convenient access to the various events taking place.

Staying at Disney’s Contemporary is the absolute closest most people can ever get to staying right in the heart of the Magic Kingdom. Whether you opt to stay within the Contemporary’s Vacation Club extension of Bay Lake Tower or keep to traditional deluxe resort accommodations, you can’t go wrong with booking your stay here, especially when considering the convenience in location to Magic Kingdom Park right next door. There is even a walking path from the resort to the Park’s entrance! And if that’s not enough, it’s also right on the Walt Disney World Monorail Line, making it easy to hop right on (from within the lobby no less) and head to the Park, other area resorts, or even the Transportation and Ticket Center, where you can then board another Monorail destined for Epcot Park.

Aside from all those perks, Disney’s Contemporary Resort is known for plenty of stellar onsite amenities to make any guest stay magical at any time of the year. California Grill, the resort’s famed rooftop restaurant, is a known favorite for dining in par with the Magic Kingdom’s nighttime spectacular right next door, so imagine how much more magical it will feel during the 50th Anniversary celebrations! And on one final note, Disney’s Contemporary Resort is one of the two aforementioned original resorts that opened along with Magic Kingdom Park’s grand opening in 1971. So therefore, it too is celebrating its own 50th Anniversary as a Walt Disney World Resort—an extra special reason for why you should consider staying here.

This is the resort that most often comes to mind when people try to imagine the grace and elegance of staying in a Deluxe Resort Hotel at Walt Disney World. The very epitome of regal, royal, and fairytale charm, Disney’s Grand Floridian Resort & Spa not only evokes the turn-of-the-century feel of Florida’s Golden Age, but conveys a magical quality that fits perfectly with its immediate location to Magic Kingdom Park. Being on the Walt Disney World Monorail Line gives guests quick and seemingly immediate access to the Park. And, like the aforementioned Contemporary Resort, you can also take this same line to the Transportation and Ticket Center for a convenient change over and then continue on to Epcot.

There are also ferry boats departing throughout the day, taking guests across Seven Seas Lagoon to Magic Kingdom Park and back again, for a more leisurely and scenic alternative way to travel. Likewise, there are ferries that also depart to the aforementioned Transportation and Ticket Center. And while Disney’s Contemporary was previously the only resort to feature a direct walking pathway to Magic Kingdom, groundbreaking is currently underway for the establishment of another walkway from Disney’s Grand Floridian to the Park. In addition to the convenience in commuting that can be yours when you book your stay at Disney’s Grand Floridian, the resort boasts a bounty of stellar amenities, from award-winning dining experiences, spa services, shopping, restaurants, scenic views across the Seven Seas Lagoon to Magic Kingdom Park (and a wonderful vantage point for viewing the nightly Electrical Water Pageant), and plenty more perks to boot.